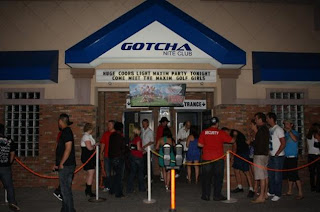 Well, well, well. Here I thought Shane Bunting moved out of Kelowna. Glad to hear he's over his three year Viagra and Oxycontin addiction. I wonder who supplied him with it anyways? He admits to being friends with the Hells Angels. Looks like the Swollen Members played at Gotcha's night club in Kelowna on September 16th. They say Gotcha has new owners and they are changing the name of the club to Sapphires. Shane Broesky seems pretty solid (well relatively speaking) but who else is involved? People are saying this is supposed to be the new Liquid Zoo in disguise but I can't see a connection. Shane looks as clean as Martha Stewart. Well almost. As long as he keep arms distance from Bunting an his buddies he'll be fine.
Posted by Dennis Watson at 11:05 AM