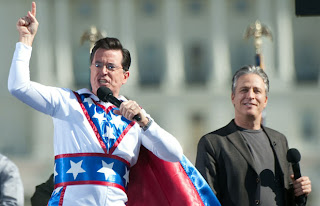 What we need in BC, (and everywhere else) is political balance. Draw a line in the sand and call it democracy. The further you get away from that line, to the left or the right and you find dictatorship. Hitler was no better than Stalin.

Preston Manning swept the West many years ago with a vision of looking beyond the left and right. The East saw it as a right wing racist separative movement but that wasn't what it was at all. Manning's slogan of unite the bright was changed to unite the right and the Mulroney break aways joined with the Mulroney Conservatives and the party came full circle back to where it set out to reform. Pork Barrel tax and spend politics running huge deficits.

The United States are in the same predicament. The Republicans are not any more fiscally responsible than the Democrats. The polarized fighting between the red and blue States has been immortalized in the red white and blue.

The night before Halloween, a rally in Washington was hosted by comedian-satirists Jon Stewart and Stephen Colbert. The two-hour rally provided an outlet for Americans who have grown frustrated with a hyper-partisan political and media culture that often drowns out respectful debate in the country.

One of the things the comedians were quoted as saying struck me. Americans used to be proud of their differences and their ability to work together. Indeed. If it takes humour to be able to look at ourselves and laugh at ourselves then so be it. Looking past our differences and celebrating our diversity is crucial in joining together to defeat the enemies from within and make our world a better place to live. For everyone.

For us in BC that means rising above political extremism. Fiscal responsibility without exploiting the elderly and disabled. It really is that simple.