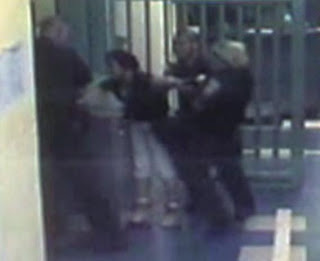 In the video, officers are seen kneeing, kicking and stripping Stacy Bonds of her shirt and bra. Bonds is a make-up artist with no previous criminal record and no offences. She was arrested after being stopped walking home in the early morning. An officer ran her name through the police computer, found she had a clean record, and she was told to continue walking home. When Bonds turned back to question why they had stopped her in the first place, she was arrested for public intoxication. 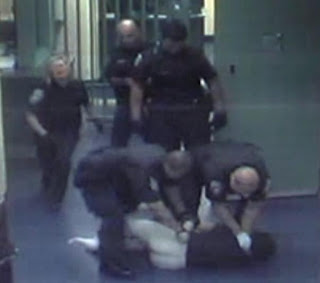 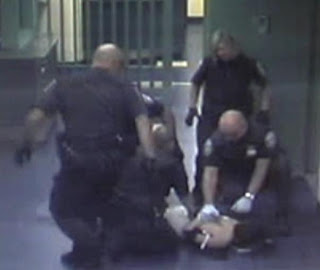 The video is highly disturbing and raises a number of questions. Why are the officers using so much force? Bonds does not appear to be resisting arrest but they are hostile towards her. How is this behaviour even possible with five officers present?

This is what they did to someone who was knowingly wrongfully arrested. How can we fight wars on foreign soil to defend human rights only to ignore them in our own country? The video is sad and disturbing.

Obviously law enforcement is a good thing. Obviously these officers acted in a lawless manner. Obviously not all law enforcement officers act this way. Yet unfortunately as we have seen, too many do. It appears the chunky female officer who gave the girl a knee strike pulled a muscle doing so and had a hard time walking on it momentarily.

Obviously someone who saw this video was disturbed by it and released it to the media for good reason. Whistle blowers are protected under the law. Yet how likely will that law be upheld? Not likely. Rumour has it that the Delta police force has already viewed the video and has determined that no police misconduct was committed. That report will likely be release in about a year after the shock has died down and the public has forgot about it.