BC Teachers: Get back to work - Update 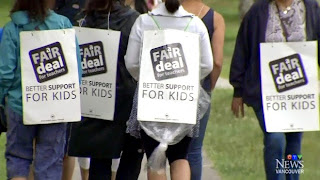 There is nothing more disgusting and infuriating that seeing BC Teachers on strike again holding signs that say think of the kids. Going on strike does not help the kids. Teacher's raises do not help the kids. If the government locks them out that is one thing but going on strike is another. You don't have to ratify a contract. There is no reason you can't vote down the contract, keep working and let the courts hash out the details of the contract. The Union can sign a memorandum with the employer agreeing that the old contract remains in effect until the new contract is ratified. Everybody knows the BC Liberals are corrupt. Everybody knows the BCTF is corrupt too. Now we know the teachers are selfish and greedy and don't give a rat's ass about the kids.

Never before have I had such an uncontrollable urge to yell out get back to work when I see a picket line. Never. I support free collective bargaining and the right to strike. However, education is an essential service. You only graduate once. You're only in grade eight once. You once play sports in that year once. Nothing replaces those lost memories. Nothing. Now when I see a teacher with a picket sign that says think of the kids I just want to scream out Shame! That's my position on the matter. Let the parents volunteer for the extra curricular activities and God help any selfish bastard that calls them a scab.

Update: Christy Clark's recent publicity stunt is yet another example of everything that's wrong with the BC Liberals. She sends out a press release saying she's asking the Teachers to call off their strike and the media reports that the Teachers rejected her offer to return to work. That in itself is ridiculous. If she wanted the teachers to return to work she makes them an offer at the table. I'm sure if she said they would obey the court order they have refused to obey that would have significant more impact in getting the teachers back to work. This conflict isn't a matter of being on the teachers side or being on the government's side. Both are wrong here.

What the government isn't allowed to do, which is to my understanding reflected in the court order they are in contempt of, is legislate someone back to work and throw away their existing collective agreement. True, wages are considered part of a collective agreement but the rest of the contract they just can't throw out at will. That's what they did. So although the teachers are being greedy and selfish and are using the kids for their own personal gain, it is important to realize who really caused the problem and elect a new government next election. We also need to remember that Surrey MP Fassbender is the current Labour Minister at the seat of the conflict. Fire him.