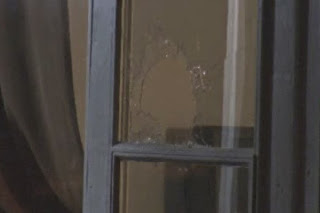 Global is reporting that "Surrey RCMP are investigating a targeted gunfire attack that happened early this morning. According to authorities, at least one shot was fired at a house on 138th Street, near 105A Avenue at approximately 3:15 a.m. Investigators say they believe a “long-barreled” weapon was used — leaving a large hole in the window of the home. At least one person was in the property when the shot was fired. He wasn’t hurt and is cooperating with police – who say he is not known to them."

It looks like someone threw a rock through he window. A rifle would have made a smaller hole. A shotgun would have had to have been awfully close to make that small of a hole. If they were at the street the buckshot would have scattered. It might have been a shotgun slug. That would fit the bill. The house is three blocks over from the Front room and one block over from Shakerz.