Environmental disaster at Mount Polley Mine 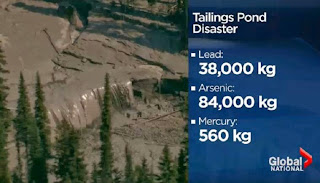 This is why residents of British Columbia do not trust Oil companies like Enbridge or mining companies like Imperial Metals. They don't give a flying f*uck about the environment. They only care about cutting corners and censoring the media.

Global is reporting that a breach of the tailings pond on Mount Polley Mine sent five million cubic metres of toxic waste into Hazeltine Creek, Quesnel Lake and Polley Lake, with fears it could spread far and wide in the coming days. That's an amount of water equivalent to about 2,000 Olympic-sized swimming pools. Local residents are calling it an environmental disaster. These are tributaries to the Fraser River. Everything is f*cked.

The waterways affected by the ban, which earlier included Quesnel Lake, Polley Lake, Hazeltine Creek and Cariboo Creek, now also include the entire Quesnel and Cariboo river systems right up to the salmon-bearing Fraser River. I've got a lot more to say about this but am too upset to talk.

The devastation up the lake is unbelievable

Mount Polley mine tailings breach is a wake-up call 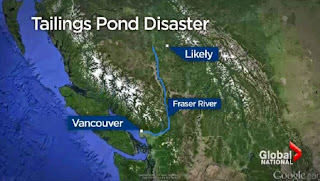 Imperial Metals are the lunatics that want to blow up Catface mountain and turn it into an open pit mine. They want to blow the top off a pristine mountain in a protected biosphere and let all the mess and toxic metals fill the Claquot sound. Investors do not invest in Imperial Metals. They are a bad investment. Their reckless greed is shameful. Boycott them. 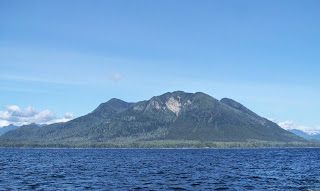 The Globe and Mail is reporting that Gerald MacBurney, a foreman at the dam for seven years before he recently quit, said the dam was breached last May and that weakened the whole system. Yet the criminal negligence began long before that.

Concerns raised in a report three years before

Consulting firm says it raised concerns over B.C. mine in 2011

Laila Yuile has pointed out that Imperial Metals donates to both political parties making them legally liable as well.

Gerald MacBurney on Global. The company says the dam’s failure has been stabilized, although it has not stopped, and the cause of the breach is still not known.

Speaking of environmental disasters, what's going on at Fukishima? Have they stopped the leak yet? That is something the public needs to know.