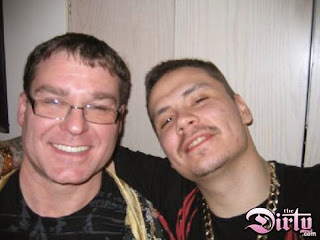 Everyone's pretty choked that Aaron Douglas, the Chilliwack shooting suspect police have issued an arrest warrant for the double shooting in Chilliwack was out on bail for attempted murder. He was charged with attempted murder for shooting Jeff Karpes twice close range to the chest. How he made bail when Karpes saw him and was an eye witness is astounding. No doubt the Aldergrove judicial Review board will once again concur, judges are the problem. The third victim in that shooting, Penny White, appears to be hanging on. Aaron Douglas has also been accused of murdering Deano Paus the person in the photo on the left beside Aaron.

Evidently Aaron wasn't on bail, the murder charges were dropped. Two days after shooting victim Jeff Karpes testified in court, Crown Counsel took a guilty plea from Douglas on one weapons charge and stayed the attempted murder charge. This was a crown counsel screw up. Just like the Jamie Keheo and the Kyle Yellowbird cases. Absolutely shameful.

Update: As one blog reader has pointed out, Lori Stevens, the crown prosecutor who dropped the attempted murder charges against Aaron Douglas so he could reoffend and possibly murder two more people was directly involved in that bizarre case of animal abuse on a dairy farm in Chilliwack. She was disciplined by the Law Society as a lawyer for her role in that abusive farm.

OK so that's one misconduct but what about the other? What about her letting someone off for attempted murder when the witness who he shot testified in court? What about that misconduct? It likely resulted in the murder of two other people and seriously injuring a third. Clearly that was another case of serious misconduct.

This case has definitely opened Pandora's box. Normally it's pretty hard for the public to have a say when the crown makes a serious mistake in plea bargaining and letting someone off with murder. It's hard for the public to have a say because they aren't privy to the evidence. We don't know what the evidence is so it's hard for us to say they're wrong and the case should have proceeded when they instead let them off. This case opens that door wide open and forces us to also ask about the Jamie Kehoe case and the Kyle Yellowbird case. More importantly we need to ask who were the crown prosecutors on those cases?

In Lori Stevens case it is clear she made a huge screw up on the farm. She admitted her role in that. Which leads us to the overdue Epiphany that lawyers and judges are human and can make mistakes. They can also be guilty of misconduct. That is why they have to be publicly accountable. This whole fallacy of "I'm learned in the law and you're not so the public has no right to criticize me" has to go. The public pay your wages and elect the governments that create the laws the courts are paid to uphold. The public must have a say about court misconduct. Natural justice cries out for it.

Again that brings us back to the Jamie Kehoe case and the Kyle Yellowbird case. The suspects in those cases need to be charged and the crown counsel that let them off need to be fired. That's all there is to it. If Lori Stevens isn't fired then there is no justice in crown prosecution.