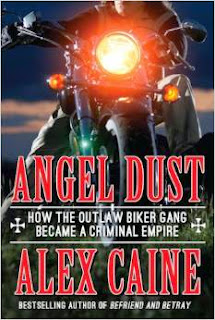 Alex Caine has just released his third book in his biker trilogy called Angel Dust: How the Outlaw Biker Gang Became a Criminal Empire. I wrote a chapter for him about the Vancouver Gang War but I don't know yet if it made the final cut. I understand that he mentions Margo Compton and another case about a little girl named Dallas Grondalski in it. Julian Sher also wrote about her in his book Angels of Death so no one can say he's making that up. This picture of him with Sonny Barger isn't photoshop either. 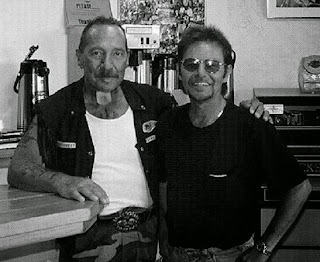 Dallas was the five year old daughter of Billy Grondalski who was a member of the Vallejo chapter of the Hells Angels. Gerald “Butch” Lester was president of that chapter and Charles Diaz was the Sergeant at Arms. The two murdered Billy and his entire family after they kicked him out of the club. Charles Diaz cut Dallas’s throat and Butch shot her. Then they burned down the house with all the bodies in it. That's part of the court record.

Update: OK I picked up a copy of the book at Chapters and it looks pretty good. The chapter I sent in on the Vancouver Gang War didn't make the final editing so here it in in pdf format. It needs to be updated since I sent it to him back when the blog only had 6 million hits. This month we just broke 12 million. There have been a few more convictions since then.

He does devote nine pages to my blog starting at page 230. It's a pretty good summery of what we've done and even concludes with a pretty good description of my basic philosophical beliefs citing Martin Luther King and Allan Watts. It brings me to the conclusion that I'm going to have to put together a book of my own expanding on what's been said and tying everything together. I want to talk about criminal organizations and civil liberty. The importance of confronting the one to preserve and protect the other.

The interesting thing about this book is that he has a chapter on the Vancouver Hells Angels involvement with the stock market.

Update: Interview on CTV - The Hells Angels are a “clear and present danger to our social fabric."

Posted by Dennis Watson at 5:42 AM