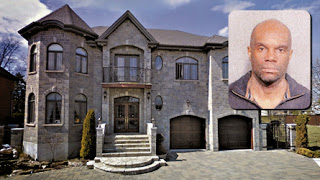 CBC is reporting that Ducarme Joseph, the leader of the 67 gang tied to the crips was shot dead last night in Montreal. This is significant because he is without question a big player with a long criminal history in the Montreal drug scene. He was very wealthy and made some serious coin.

It's also interesting because August 2012 Chenier Dupuy, leader of a north Montreal street gang called Bo-Gar was shot dead. The Bo Gars were affiliated with the bloods who under normal circumstances are enemies of the crips. It's also interesting how that murder was also tied directly to the Hells Angels.

Greg Wooley was a Caribbean brother that Mom Boucher the white supremacist got to sell drugs to all of the crips in Montreal. There was a big meeting between the African street gangs in Montreal where Greg was trying to convince everyone to unite and sell drugs for the Hells Angels. Chenier told him to f off and slapped him in front of everyone. Greg was small Chenier was big. Not long after that Chenier was shot dead.

Bo Gars is taken from the French. Bo being slang for beau which means handsome and Gars being short for garcon the French word for boys. So the name of the gang means handsome boys but since we wouldn't really say that on the street in English a better translation would be hot guys. The point is the Hells Angels were indeed directly involved with these gangs and the reason Ducarme Joseph was so wealthy is because he was working for the Hells Angels. At least at one point he was. The fact that he might have acquired a new supplier might have been the reason why he was shot however he could have just as easily been shot by a rival. Yet if it was a rival you'd think they would have shot Wooley not Joseph. This sounds more like Wooley pulling a Mom Boucher and eliminating political opposition to me.