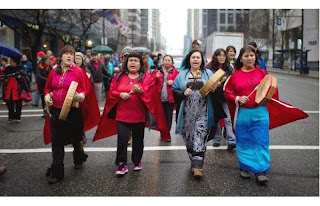 This is exactly what I'm talking about. This is exactly why these bizarre trade agreements have nothing to do with free trade and everything to do with removing our democratic system. The Vancouver Province is reporting that Taseko Mines is taking the Federal Government to court because it rejected it's application to create an open pit gold mine beside a lake over environmental concerns. WTF?

In Costa Ricca a Canadian mining company sued the the Costa Rican government over the canceled Las Crucitas gold mining concession. The concession was revoked in 2010 following environmental concerns and doubts about the concession’s legality. The corrupt company claimed that Costa Rica violated the Costa Rica-Canada Bilateral Investment Treaty when an Administrative Appeals Court revoked its mining concession in San Carlos, Alajuela, in 2010 and sued for a billion dollars in damages. The Costa Rican government was forced to let them continue their hazardous practices. These trade agreements remove our democratic sovereignty.

This time they aren't even going in front of one of these ridiculous closed door tribunals. They're going in front of the Supreme Court of Canada. Where and the hell is the jurisdiction to hear this application? The public elect a government, the government says no over environmental concerns and that's it. There is nothing more to discuss. The people had a protest and the government actually listened for once. Now a corrupt corporation wants to overturn the democratic will of the people. That is the problem right there. The court has absolutely no jurisdiction on this matter.