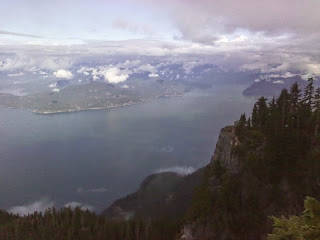 Yesterday I took Howe Sound crest trail from the parking lot on Cypress to St Mark's summit and both peaks on Unecessary mountain. The first picture is the view from St Mark's summit.

I was hoping to make it to the Lions as I've never done them from this route before. I've done them from Lions bay which they say is shorter but steeper. The beginning of the trail is well groomed and the first two switchbacks up St Mark's summit look just like the trail up Baker called the Heliotrope trail. However after the first two switchbacks the trail gets fairly rugged pretty fast. Lots of rocks and roots. They are working on improving the trail with bobcats but that's a big job so it is. 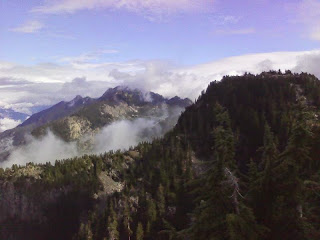 Just as I hit Unecessary mountain the fog started to roll in covering the lions. In this picture you can just barely see the tip of the west lion with the east lion being completely hidden by fog. 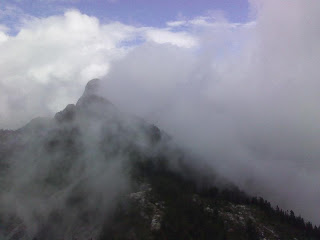 The wind was coming from the ocean so I thought luck was on my side and it would blow the fog away. In reality, withing two minutes the wind brought fog from the ocean and the entire panorama was zero visibility. This is a direct view of the Lions from the north peak of Unecessary mountain: 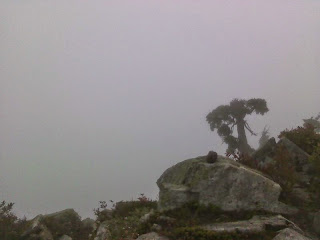 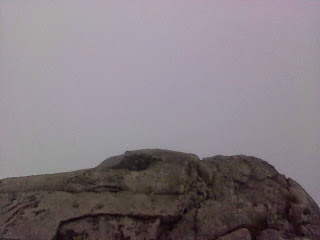 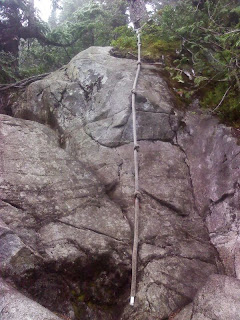 I was somewhat disappointed to make it so close to the lions and have to turn back defeated. The lions are without question the crown jewel of Vancouver. As I was descending there were several groups that were determined to pass the Lions in their journey despite the fog. One group of backpackers were heading to Deeks lake while two groups of runners were going all the way to Porteau cove. That is a long way.

For me the Lions is the primary quest. If you go too early in the summer there's still lots of snow to cross. If you go mid summer in the heat, you'll need more water and since there is no fresh water en route you have to carry it which significantly adds to the load. Now is the best time of year to do them. Not too hot and the trail is bare of snow finally. Yet like always on the coastal mountains the visibility is hit and miss.

This is an old youtube video I made of the Bruce Cockburn song Wondering Where The Lions Are. It has pictures around Vancouver including a close up of the lions when I hiked them from Lions bay. Yesterday as I stood at their foot looking straight at them hidden in dense fog that song Wondering Where The Lions Are came to mind. Of course it's also metaphorical. Wondering where the lions are can also mean the lions of Judah willing to stand against crime and corruption in defense of civil liberty. But then again people say I'm too metaphorical. This is a picture of the Lions from Hollyburn ridge on Cypress. They are the crown jewel of Vancouver. 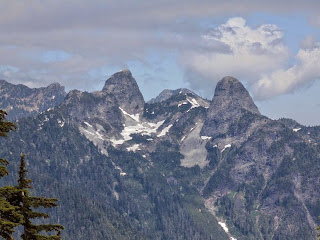