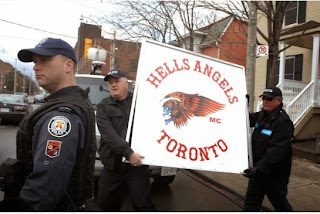 As we know the police and the government have seized the Nanaimo Hells Angels clubhouse and have applied to the courts to seize the Kelowna clubhouse under criminal organization legislation. Recently the court directed the crown to provide a list of specific cases where the Hells Angels have in fact been involved in criminals activity. That is a simple and reasonable request. Although the number of cases is exhausting, I put together a pdf file listing a few off the top of my head. When you start to connect the dots and do the math it's pretty overwhelming.

Since I realize police officers read my blog as well as gang members, please forward a copy of the pdf file to the Crown counsel in support of their application to seize the clubhouses. I have much more to say on the matter but it has taken me longer than I thought to put the list together and I wanted to get it online so it can be forwarded to assist the lawyers in that case. Cheers.

The first BC Criminal Organization Conviction was in Kelowna. Thomas Donald Fraser and Jason Jonathon Herrick were convicted of trafficking cocaine on behalf of a criminal organization. 6 kilos of cocaine and 400 ecstasy tablets were seized. Only the criminal organization wasn't named. Yet in one of the intercepted phone calls between the two men, Fraser phones Herrick and orders him to “bring some s**t” to “the clubhouse.” With loud music in the background, Fraser tells him the address is 837 Ellis Street, the property known locally as the Hells Angels clubhouse. “Bring lots,” Fraser said. “A quarter.”

A former Kingpin Crew member charged with drug trafficking but that was a pretty insignificant bust. Joey Verma on the other hand was doing some pretty high level drug trafficking even while in prison. We all know who he was associated with. Darryl Wilcox was charged with selling 18 kilos of cocaine. He was a Hells Angels associate. We didn't even mention uncle Joe racing through Salmon arm with a car load of guns and a cell phone jammer right before that local grow was abandoned. That's more criminal activity for ya out of the Kelowna clubhouse. Ryan Ennis, one of the guys with uncle Joe moved into Darryl Wilcox's house while he was in jail. I'd say that's a confirmed association. 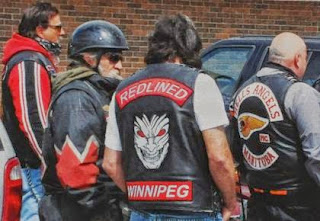