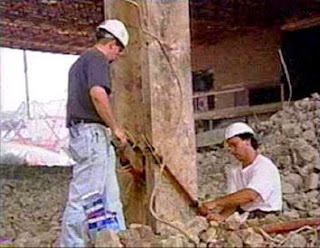 Since 9/11 is still being used as a pretext for war and to rationalize doing away with civil liberty we clearly need to reexamine just what really did happen on that horrific day. The third tower fell when no planes hit it. Three towers fell on September 11th not two. No planes hit the third tower. It collapsed into it's own blueprint at freefall speed just like a controlled demolition. The official version claimed that building collapsed at freefall speed due to heat and fire. That is not possible. The only way that can happen is if the load bearing beams are blown out like a controlled demolition. That is what experts in the field are saying.

The Twin towers also fell at freefall speed into it's own blueprint just like a controlled demolition. There was no resistance. It wasn't a matter of the floor where the plane hit collapsed and put pressure on the floor beneath it which put pressure on the floor beneath it and so on. That would have taken time. This was freefall like dropping an apple off the top of a building. The only way that can happen is if the load bearing beams are blown out.

Consequently, George Bush changed his tune. He later admitted operatives placed explosives in the building that went off after the plane hit it. Indeed they did. The load bearing beams were blown out. That would explain the thermite residue, the molten cars found at the base of the towers and the molten metal found in the ruble long after the building's colapse.

No conspiracy theorist made up Operation Northwoods. That declassified operation was real. It was proposed by the director of the CIA and signed by the joint chiefs of Staff. If Kennedy hadn't vetoed it, they would have implemented that sinister plot. Operation Northwoods needs to be examined and discussed because they implemented it on the USS Liberty. That was treason.