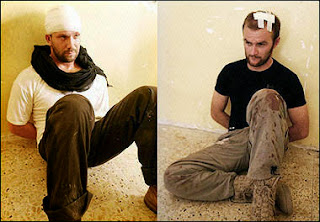 There has been a lot of things in the news lately distracting us from the fact that Obama is in contempt of court for not obeying the court order to release the Fast and Furious documents he has been hiding under executive privileged. The most dramatic of which is the video where terrorists claim to behead a journalist.

I'm certainly not going to jump the gun and say every terrorist act is fake or a false flag attack. I will say that my first impression on hearing about the video is that those people are either stupid or it's fake. Think about it. Everyone knows that acts of terrorism enrage the public. As soon as an act of terrorism occurs, what are normally good, God fearing, tolerant people instantly become unglued and say nuke them. After 9/11 Afghanistan was invaded. Clearly terrorists are not the brightest of criminal out there but even they must have some concern about the public perception of their cause. Committing an act of terrorism does not win public support. It inflames it.

Even worse is a brutal act against a journalist. Normally extremists are trying to win over the media to get them to report their side in a positive light. Kidnapping and executing a journalist crosses the line. It's like shooting a peace keeper or a red cross worker. The video claims that if you don't stop bombing us we will keep killing more journalists and innocent civilians. Anyone with a brain knows that is going to create the opposite effect and convince the public to nuke them. That is why I say these terrorists have to either be stupid or the video is fake.

Another bizarre aspect to the video is the fact that it's supposedly made by terrorists in Syria. Syria? Really? One minute we're all in an uproar because the Syrian government used chemical weapons that the west sold him on civilians and want to help the rebels bring him down. Now, as soon as we hear the rebels that we supported in Libya and were prepared to support in Syria are Islamic extremists, now the Syrian government can kill as many civilians as they want and that's all of a sudden OK and we are going to send in troops to wipe out his opposition. This is getting more bizarre by the minute.

Obviously some people think the video is fake. The Epoch Times is reporting that Alex Jones from Infowars has raised some interesting concerns about the legitimacy of the video. People can scoff at Alex Jones all they want. He did raise some very legitimate points in the attack on the USS Liberty and he most certainly didn't make that up.

We know that the CIA has crossed that forbidden line in the past many times before. They have used agents with the false cover of journalists. Crossing that line destroys the credibility of the journalist and put the safety of every other legitimate journalist at risk. Consequently, Sotloff's connections to Mossad are very suspect indeed.

Just to recap on a couple things that we do know, we know that Iraq was invaded based on a lie. They had no WMD and the intelligence community knew that. Operation Mass Appeal was an MI 6 operation that sent out press releases to the media with false information having the sole intent to deceive the public.

We know that back in 2005, two British soldiers went undercover and were caught driving a civilian car loaded with weapons dressed as Arabs. They insisted they were on a secret mission and instead of telling the police at the check point what their mission was, they opened fire on them which resulted in them getting imprisoned. Instead of telling the allied forces in Iraq what their mission was, England destroyed the prison and broke them out without a trial.