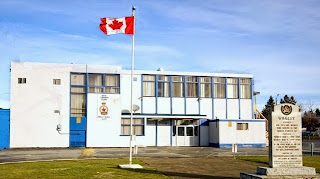 Contrary the the Christy Clark Diane Watts crime denial program, the Vancouver Sun and the Surrey Now both recently reported that the Whalley Legion is under siege from drug related crime and the city won't do anything about it.

"People are defecating outside our front door, hiding needles everywhere and urinating on our stairs and on our cadet hall,' says a Legion spokesman." Hiding needles everywhere? Why that's right by the needle exchange. A needle exchange is supposed to be an exchange. You hand in an old dirty needle and get a new clean one. Instead they just hand out needles and the addicts throw them everywhere. That is a health hazard.

The same problem happened in Victoria. Residents were complaining about needles being thrown everywhere after the city changed it's policy and just started handing out free needles instead of exchanging old ones. As a result, addicts have absolutely no incentive to properly dispose of their needles. Why the city will simply give them a new one. That is messed up.

For the record, this is the area right beside the Front room that we've been talking about all this time. Homelessness isn't the problem, illegal drugs is. Here we have the Legion complain to the city about drug related crime and the city responds by saying there is nothing we can do. Yes there is. You can arrest the crack dealers and move the needle exchange after you return it to being an exchange instead of a free needle throw them wherever you want free for all. I'm not saying kick the cat. I'm not saying harass the homeless. I'm saying harass the crack dealers. They are the predators causing the problem.

"It's been an escalation for the past three weeks, more people are being directed to our area," said Reid. More people are coming because word has gotten out they let you sell and smoke crack there. Stop the ridiculous policy and you will see a huge reduction in crime.