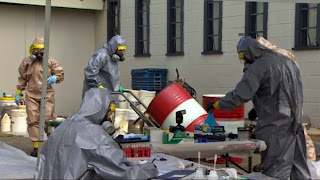 CBC is reporting that Mission RCMP spent all day Monday pulling evidence and material from a massive illegal drug lab in the 7100 block of Horne Street which investigators believe was run by a motorcycle gang. Gee I wonder which one. Since there are no Outlaws or Rock Machine in the lower mainland that leaves us with the Hells Angels. Just like how long time Surrey crystal meth cook Kerry Ryan Renaud was working for John Punko and the Hells Angels.

"A police source close to the investigation says this might just be the biggest drug lab ever found in B.C with commercial mixers and 200-litre drums producing millions of dollars worth of drugs per week and housing enough chemicals to level a city block. The lab was only discovered when a chemical reaction went bad Saturday just before noon. Four to five people were seen running from the subsequent fire. When the Mission Fire Department saw what it was dealing with, it called the RCMP."

Jeffery said although the bosses behind the Horne Street lab will hurt in the short term, they'll be back operating again as long as they can keep supplying the necessary ingredients. "More money will be made available, then another lab will pop up. It's only a matter of time," he said.