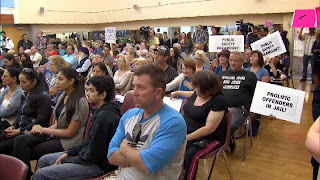 There was another rally against crime in Newton on Sunday. I missed it. It appears that existing frustration has understandably been escalated with the recent murder of a 17 year old girl in Newton by a high risk offender. I will completely agree that was a horrific crime. It's complicated because he wasn't a repeat offender. He committed one rape and served 22 years in prison. I attended another rally when the balcony rapist was released in Newton. That was a repeat offender. In this case, electronic monitoring should have been used. That is something we can implement.

The Vancouver Sun is reporting that “Stop the Revolving Door of Justice,” read a giant banner behind the stage at the Newton Seniors Centre. “If you don’t feel safe in your neighbourhood, nothing else matters.” We all know who's sign that was. Vern was previously referring to the prolific offenders that commit an absurd amount of property theft to pay for their drug addiction and do less prison time the more offenses they commit. Our system is indeed broken.

Again in this case, as tragic as it is, the suspect was not a repeat offender. I am very cynical of all these dirty politicians jumping on the bandwagon spewing nonsense. Case in point, even Chrsity Clark has jumped on. Let's talk about electronic monitoring for high risk offenders and lets talk about the 30 strikes you're out proposal by the VPD. Let's not spew nonsense.

Global is reporting that "Organizers say the rally is also in response to the murder of hockey mom Julie Paskall who was killed last December." CBC is reporting that "Residents say sub-standard housing, flophouses and drug dealing are responsible for crime in their neighbourhood." That is the root of the problem. Bogus treatment centres that don't help addicts get off drugs. They scam the methadone program and sell them real drugs instead of getting them off drugs.

The Welcome Home Addition Recovery Academy doesn't prescribe methadone it helps people get off drugs and give them employment and life skills. We should be bending over backwards supporting this program instead of the other pharmaceutical scams and flop houses.

The solution is simple. We need to arrest the crack dealers in Newton and Whalley. Not the addicts, the dealers who prey on the addicts and violently abuse them. When we refuse to do that we become culpable for the resulting violent crime that creates.

In contrast, the Vancouver Province has been running a series of articles about all the mentally ill on the streets and how Transit police say arresting them is pointless. If someone commits a prolific amount of property crime, they need to be arrested. 3 months in jail with no drugs is not excessive. If someone has a mental illness and they are living on the street, we need to find housing for them that isn't in a drug house. Closing down Riverview and putting all the mentally ill on the street to be oppressed by the drug dealers isn't helping any one.

I really want to emphasize that these predatory drug dealers are oppressing the mentally ill. They give them crack for free then beat the life out of them for payment. Anyone who lives off of those avails is a POS. We need to arrest the crack dealers. That is something we can and should do.

I will also point out that this deranged misinterpretation of harm reduction is in reality harm promotion. One thing the City of Surrey did right under Dianne Watts was deny a permit for the creation of a drug house in Whalley. Extremists are complaining that the City opposes Harm reduction. No, the city opposed a drug house and the oppression of the mentally ill. These extremists are just plain evil. They are feeding the gang war and the predators that push addicts out of windows for drug debts.