Police State or Clown Sate - Which will it be? 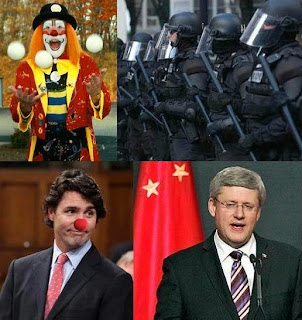 I hate to be the bearer of bad news, but Canada in a bad state. Two articles in today's paper are of interest. One is an article about China's involvement with torture. Not a word from Stephen Harper about it. Recently we had a long tirade from Harper about Russia's past history with Communism itemizing some of the brutal atrocities Stalin committed. Yet Russia isn't Communist any more and China is. Not a word about Chairman Mao or all the current atrocities China is involved with. Just a federal government bullying Vancouver City Hall to censor those important protests.

The other article is an absurd tirade about the latest ridiculous ISIS video threatening Canadians in their homes. One threat is real, the other is not. One threat is being obsessed over, the other one is being censored and hidden. Let's give them the benefit of the doubt. Let's pretend this latest absurd video wasn't made by MI6 and the CIA. Let's pretend it's real. OK so who made it? It sure didn't come from Mecca. It sure doesn't represent Islam. It didn't come from Syria. Both sides of that conflict are blaming the other. The last video pretending to be from Syria had someone speaking with a British accent. If they're speaking with a British accent, they aren't from Syria now are they.

So the video isn't from the government of Syria, nor is it from the rebels opposing him. If it is real, which I most certainly do not believe it is, then it's coming from a handful of whacked out nutbars spewing absolute nonsense. How real is that threat? Not very. When North Korea threatens to nuke the United States, that threat is real. The only thing holding back that lunatic from carrying out that threat is the fact that he doesn't have the technology to carry it out. So why on earth are we helping them become capable of such an outrageous threat by giving aid and censorship to Communist China? China was responsible both the Korean and the Vietnam wars.

I have nothing against doing business with China. I have nothing against doing business with Cuba either. I'm against giving China our oil rights which means we are helping the military expansion of a Communist dictatorship every time we fill up with gas at the pump. They profit from our resources instead of us. I'm against this new trade agreement with China that has absolutely nothing to do with free trade. It removes our sovereignty and crushes our democratic system.

Again this ridiculous video and Harper's absurd tirade that goes along with it just doesn't make sense. It's dripping with so many contradictions it's impossible for me to conceive that' it's purpose is anything but a smoke and mirrors distraction from the complete loss of our civil liberty by letting Communist corporations take over Canada.

Again, let's pretend the video is real. OK so it's not coming from the government of Syria or the Rebels opposing them. It's not coming from Mecca and does not represent Islam. If it is real and I do not believe it is, it's coming from some obscure whacked out hillbilly in the middle of nowhere that has absolutely no means of carrying out it's ridiculous threats. Unless of course the intelligence community helps them do so again.

So here's the deal. If the purpose of this video is to gain support for their cause it does the exact opposite. No one in their right mind would support that. The only people that want us living in a state of fear is CSIS and the CIA who are passionately trying to destroy the Constitution and remove civil liberty as they lose $ 1.5 billion in taxes from their ridiculous budget every year in Canada alone. That is extortion and fraud.

Burnaby NewsLeader is reporting that New Westminster grandmother Lesslie Askin, 71, found RCMP officers, including a member of the national anti-terrorist unit, on her doorstep last month, 10 days after she took photos of oil storage tanks at Kinder Morgan's Burnaby Terminal. 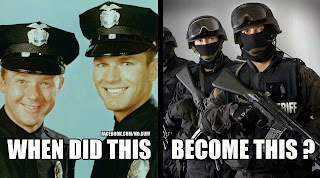 So which will it be? Stephen Harper's Police state or Justine Trudeau's Clown sate?

Today we read about how a Chinese "dissident" just received life in prison for expressing his political beliefs expressing a desire to separate from China. That's way worse then Cuba. So what is up with the Helms Burton law? Why boycott Cuba then bend over for China? It just doesn't make sense. Dare I mention Tibet and the Dali Lama. Monks are setting themselves on fire in protest because no one cares about their grievance with Communist China.