We've talked about and linked to TBM Fresh Start before. It's an organization that supports people who have left the gang life in Scandinavia. I refer to Michael Green, the founder and international spokesperson as Pitbull because he's fly like that and he's hard core. He's a former HA. The group consists of former Hells Angels, Bandidos, Mongols, Outlaws, Devils Choice, Bloods, Black Cobras, etc. They have 600 members. They actually all get along without trying to kill each other.

Most recently they have been contacted by gang members in LA who want to start a group in the States. I'll have to do an online interview with them like I did with Kerry Krysko. Obviously starting a group like that in Canada would be very helpful with our toxic mess here. I'm just curious how they deal with trolls who try to join just to get information about former gang members. They are doing an amazing job. The new logo is awesome. 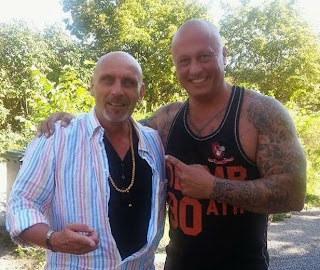 They have a new spokesperson for Norway who has joined their ranks. The former National Sergeant at Arms for the Bandidos. He looks pretty solid too. Think about it, these guys are freaking Vikings. They aren't playing around. I had a very good friend from Norway when I lived in Ireland. He used to say he was born with skis on his feet. Sounds like an awesome place. The spokesperson for Sweden is a former Hells Angel.

The whole purpose of my blog is basically what these guys are doing. I'm not doing this blog to see people get locked in jail for 30 or 300 years. It's to show people the dead end gang life leads to and help encourage them to find a better way. Leave the life and find a new one. A better one. One that you and your kids can be proud of. "No matter what your past, you have a spotless future."

When those bitch ass trolls were in my grill posting my daughter's picture online and making threats they actually criticized my post about redemption referring to a line in a Tupac song which asked Is there a Heaven for a G? Of course there is.

We live in a very cause and effect world. Call it karma if you will. After this life we will be with people who had the same morals as we did. If we spent our life lying, cheating and stealing, that is who we will be with. I had said then that I'd be honoured to spend eternity with guys like TBM because they were real. They had lived the life, saw what it was really about and left it behind. They are hardcore and trustworthy. What more could you ask for? Rock the world soldiers. See you on the other side.