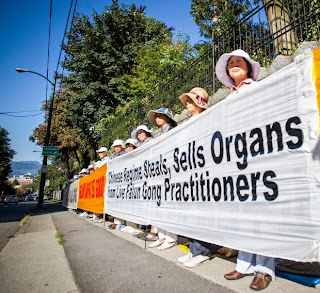 The Vancouver Province ran a series of profound articles showing how Communist China is dictating Canadian policy in Vancouver by removing civil liberty and free speech. Cameron Ward, champion of justice, is front and centre declaring that "Banning practitioners of a Chinese religious sect from protesting outside the Chinese consulate in Vancouver is “dictatorial” and is reminiscent of repressive regimes like China." He is absolutely correct. We have a charter right to Free speech in Canada. We know Stephen Harper doesn't like that right but it exists nonetheless and is the highest law of the land.

The devil representing the city said the Falun Gong protest was peaceful, but “this is not to say the next one will be like that — the city has to factor in all possible scenarios.” That is ridiculous. By his own admission it is a peaceful protest. There is absolutely no grounds whatsoever to argue what might happen IF it turns violent when it hasn't for years. They are sitting outside in the snow meditating for God's sake.

There are two important points to examine. The first is the flaming concern that a Communist country could possibly influence policy in a free republic. The second is the actual concerns the protest is expressing. aside from the obvious question as to why on earth our tax dollars are being spent on a court case no one wants that violates the Charter of Rights, again.

In 2005 the Epoch times reported the Canadian government put pressure on the city of Vancouver to restrict the protest. Last Sunday Laile Yuile reported in the Vancouver 24 Hours Who is Harper working for? She was referring to the insane trade agreement Harper signed with China that removes Canadian sovereignty and lets Chinese companies sue Canadian governments for restricting their ability to make a profit. Does free speech restrict a company's ability to make a profit?

The silent protest consisted of mostly elderly women meditating in front of banners proclaiming the brutal persecution and bloody torture in China. That is a valid concern the Epoch Times has reported on. What on earth are we doing supporting that and censoring objections to that? The sign says China sells organs. That is another huge concern we cannot be complacent in.

This is the Neo Con. While Harper and Obama spend tax dollars to create false boogeymen, they let the real boogeyman remove our sovereignty and our civil liberty here at home. Here's the irony. Harper hated Pierre Elliot Trudeau calling him a Commie because he liked Russian literature. Yet Trudeau Sr gave us the Charter of Rights protecting civil liberty while Harper (and Trudeau Jr) has done everything in his power to destroy civil liberty. Harper pretends to be right wing and support freedom when he turns around and does the exact opposite. 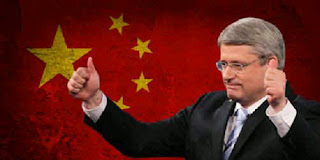 Of course, Dianne Watts, the biggest court jester of them all enters the stage to promote her tax and spend insanity in support of Stephen Harper's' Neo Con. Dianne Watts just announced she is running for the Federal nomination of Harper's Neo Con ticket. How fitting. Dianne Watts said one thing and did another. Harper would love her. She said she was going to attack crime in Surrey and she did the exact opposite. Last year was the highest number of homicides in Surrey's history. The drug related crime in Newton and Whalley is unprecedented. She was obsessed with grow ops but did nothing to stop the crack dealers. She claimed to be right wing but left us with the worst budget and biggest deficit in the city's history. What a sad state of affairs.