John Dodson on Fast and Furious 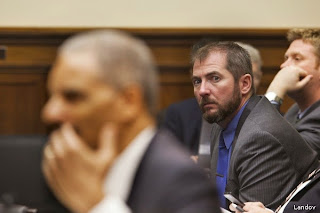 John Dodson was the whistle blower on Operation on Fast and Furious. He wrote a book about it called The Unarmed Truth. Obama tried to ban him from writing the book. The book starts off incriminating Washington. He talks about how he was complaining about the operation from day one and how those complaints fell on deaf ears. The ATF was selling guns to straw buyers they knew were selling to the Mexican cartel. He states it was an operation the brass in Washington took an unusual interest in. (page 2) Washington was involved from Day one. "A few of us pleaded with our supervisors to allow us to arrest these buyers. Time and again, we were told - I was told - to stand down." (Page 3) Yet he admits the problem is even bigger than Obama and Eric Holder.

Judicial Watch has filed a Freedom of Information Act (FOIA) lawsuit against the Department of Justice (DOJ) on behalf of Dodson. They also filed a lawsuit against the DOJ for records regarding President Obama’s claim of executive privilege after Holder’s refusal to produce records for the House Oversight Committee. However, the eye witness testimony is found in John Dodson's book. 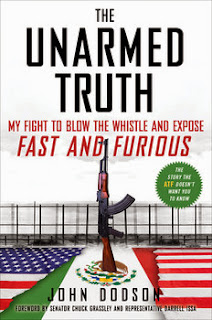 Unfortunately it is incomplete because not a word is mentioned about the drug trafficking in Fast and Furious only the arms dealing through straw buyers. The fall of the Nugan Hand bank in Australia was tied to the CIA's drug trafficking in Vietnam which was confirmed by Bo Gritz and Terry Reed. Air America was the airline the CIA used to ship the drugs. This is relevant to us today because right before the invasion of Afghanistan, the Taliban had almost completely eliminated the production of heroin there. After the allied invasion that trend was reversed and has steadily increased to record levels. The US military are even protecting the opium crops claiming if they don't the Taliban will which is another bold faced lie. 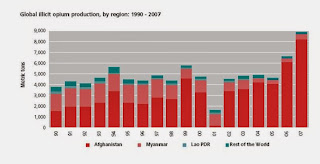 I've been emphasizing Pitbull's MIB 3 theme to understand the future we have to go back in time and have applied that to Operation Fast and Furious. To understand Fast and Furious we have to understand Mena Arkansas and Iran contra. Judge Bonner went on 60 minutes showing how the CIA did the same thing in Florida when he was in charge of the DEA. The CIA passionately denied it consistently until the allegations were proven beyond dispute. Then they said OK we did do it but it was an accident and it was the only time. Wrong on both counts. It was no accident. They made absolutely no attempt whatsoever to track the ton of cocaine they brought into Florida. Just like they made absolutely no attempt to track the guns they sold to the Mexican cartel or any attempt whatsoever to track the cocaine they brought into the United States as payment. This is indeed a pattern that was established in Vietnam and repeated consistently throughout Iran contra.

This does not mean that Democracy is bad and Communism is good. It means the exact opposite. It means Democracy can be destroyed from both sides of the fence. The official version is that the CIA did all these bad things because the end justifies the means. They were trying to protect us from the atrocities of Communism. I will show that premise was and is a bold faced lie.

Take Cuba for example. The CIA teamed up with the Mafia and the corrupt Batista government. The people rebelled and went from one extreme to the other. They jumped out of the frying pan and into the fire by adopting Communism. Just like in France after the outrageous conduct of Sarkozy, they turned around and elected a Socialist. From one extreme to the other. How about no extreme? Draw a line in the sand and call it democracy. The further you get from that line to the right or the left the further you get away from democracy and the closer you get to dictatorship. The exact opposite of a free republic which is what the US flag and Constitution represents.

Yet the subtle falsehood is just as real. This capitalistic extreme of making a profit at all costs has taken us down the road of Corporate Communism which ends in the exact same place they claim they are trying to save us from. Democracy fosters a free market. Corporate monopolies destroy the free market. The big banks and oil companies funded the Communist revolution in Russia. The elite 1% of capitalism takes over the Socialist dream and turns those noble ideals of social justice into just another bunch of greedy gluttons exploiting the 99% with a hammer and sicle.

So their claim of doing bad things to save us from Communism is a lie. That is exactly where they are taking us. Looking at Huntsviklle, the vortex of corruption is proof of that. Since when is everyone scamming the government and ripping it off so you can line your own pockets in anyone's interest but their own? It's not. It's just another lie to justify them getting rich at taxpayers expense. Some believe the lie in the beginning but it doesn't take long to see through the lie. By then it's too late, they're in over their heads. Just like with the Hells Angels.