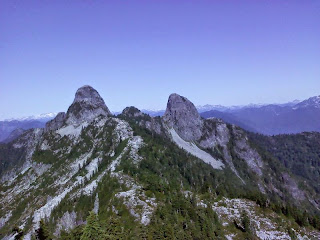 I went back for round two yesterday and hiked the Lions from Cypress. What a difference a day makes. Yesterday their was no wondering where the lions are. It was sunny and they were clearly in sight. Last Saturday they were completely hidden with zero visibility. 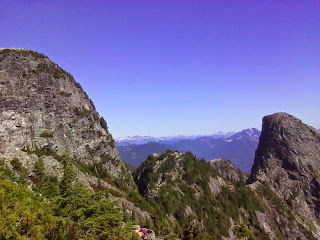 I made it to the top of the bump between the two heads of the lions. 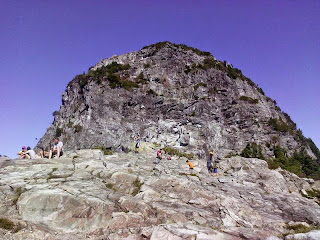 If you follow the orange dots spray painted on the rocks, the Howe Sound Crest Trail will take you around the west lion to the middle of the two peaks and then on beyond them. 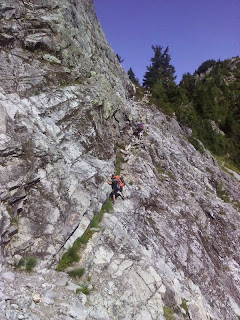 I think the trail up the west lion breaks off right before this. I didn't find it until my way back and by that time had lost my steam in the heat. Many younger kids tried it but turned back. It's pretty technical. I.E. dangerous. The key thing is you have to follow the marked trail. If you just plan on making you're own trail you're going to get into trouble fast.

On the way back one girl was commenting on how unprepared many of the people there were who hiked it from lion's bay. She said one guy say wow, I'm really dehydrated. Good thing I brought this beer with me. Yeah good thing buddy she said. On a hike like this you need lots of water. Especially if it's sunny. Two 2 liter pop bottles filled one third with water and frozen over night then topped up right before you leaver is best. Plus Gatorade and juice boxes and food to eat. These yahoos that go unprepared are the ones search and rescue end up having to go look for.

I've always wondered what it looks like on the other side of the lions. This trail that keeps on going all the way to Porteau people keep talking about. Well here it is: 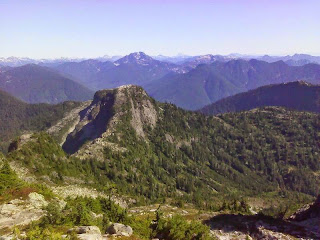 This is the view of the east lion from the top of the bump in between the peaks. You can see the Capilano reservoir on the bottom right in the distance. 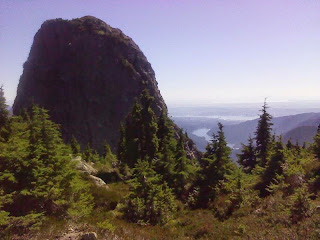 The Cleavland dam has served Vancouver well for many years. Hydroelectric dams are a lot better than nuclear reactors. They are clean and productive. They create a beautiful lake just like the Seymour reservoir, Alouette lake or Stave lake. The draw back is salmon spawning. You can see the fish ladder they put in to fix that at the base of the Cleveland dam.

It never ceased to amaze me that with all the scientific technology of nuclear reactors, they split the atom simply to generate heat that turns a steam turbine just like a hydro electric dam does. Only the dam doesn't create toxic waste you can't dispose of and create huge public hazards to everything around it. Anyways, right now I'm loving the lions.

There's no way I'd cross the side of the west lion in winter. There would be no ledge at all with snow on it. Now is the best time of year to climb them. Not too hot and the snow pack has melted. Just be careful and be prepared. Bring lots of water. In contrast, the beginning of summer is the best time to climb the glacier on Mount Baker. While the crevasses are full of snow before they open up and turning into giant hazards. Peace. 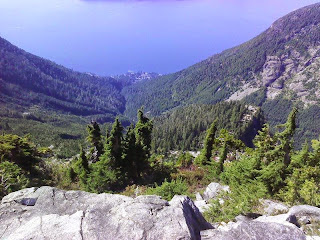