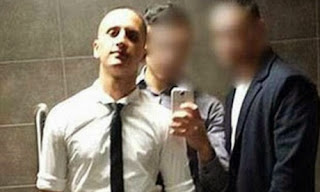 CNN is reporting that "as Australian lawmakers introduced tough new laws on foreign fighters on Wednesday, police were explaining why an officer shot dead an 18-year-old terror suspect outside a police station in Melbourne Tuesday night." They even used the term lone wolf but are embellishing that part as well.

"The teenager turned up at a police station in the suburb of Endeavour Hills for a pre-planned meeting around 8 p.m. local time, Victorian Police Chief Commissioner Ken Lay told a press conference Wednesday." A preplanned meeting. Another report states "The 18-year-old, named in parliament as Abdul Numan Haider, was asked to attend a police station in the southern state of Victoria on Tuesday night because his behaviour was 'causing concern', police said."

That is not true. He was from Afghanistan. He has family in Syria and applied for a visa to visit them. His visa was denied, they seized his passport and forced him to report to the police station once a week. Long enough for them to create a fake file on him. He was not a terrorist. He was an innocent man. He did not stab the federal terrorist officers. That is a bold faced lie. Just like how back in the day in New York if a cop shot an unarmed kid he would plant a gun on the kid and claim self defense. That is what happened here. The timing of the murder is very suspicious.

"At a Muslim youth camp in Victoria early last year, Abdul Numan Haider attended every lecture, enthusiastically took part in sport and tried his best at camp quizzes. He had to be woken up for dawn prayer but he never complained. Haider’s cabin mate, Mohammed Ibrahim, spent nine days with him and remembers him as 'quiet, very gentle, very softly spoken'."

This case is no different than the US cop who shot Jordan Baker, a 26-year-old Houston Community College student and father because he was a black man wearing a hoodie then lied about the circumstances surrounding the shooting. In this case, the Australian terrorist police murdered an innocent man.

Is everyone from Afghanistan a terrorist? Is everyone from Syria a terrorist? Is everyone who attends a rally for the environment or climate change a terrorist? We need to ask why RCMP officers, including a member of the national anti-terrorist unit, showed up at a 71 year old grandmother's home in New Westminster 10 days after she took photos of oil storage tanks at Kinder Morgan's Burnaby Terminal. Is everyone who opposes the Gateway Pipeline a terrorist? After England suspended human rights and civil liberty for terrorists, they classified anyone who participated in a peaceful occupy demonstration as a terrorist thereby removing all of their civil liberty including their right to a fair trial. In Canada first they came for the Afghans and the Syrians and I did not speak up because I was not a terrorist. Then they came for the environmentalists and everyone who opposed the Northern Gateway pipeline. After that, there was no one left.

It's like that case in London England. In 2011 one of these federal task forces shot an unarmed suspect dead. They claimed the suspect was armed and was shooting at them. They even went into an elaborate story about how the suspect actually shot one officer in the chest which hit his police radio and saved his life. Only the ballistic report showed the bullet that hit the police radio was fired from a police gun. They lied and shot an unarmed suspect. Not only that they made up an elaborate story that turned out to be a bold faced lie.

Tragically, this set off another series of riots in London. Rioting is never a healthy or productive way to right a wrong. They had the law on their side. As soon as they started rioting and looting they lost that and in so doing lost their struggle for justice. Nothing was ever done. Yet it means we have to examine these absurd claims in the context of believability. History has shown that these task forces have made up elaborate lies in the past to cover their tracks.

Disclaimer: I can't tell you how I know they murdered an innocent man in Australia but I stand as a witness that they did. Just like with the Bob Roth case, this is one case I am willing to step out on a limb over. Only this one is personal. His family is a friend of the family. They are upright law biding citizens who happen to be Muslim. I also oppose anti Semitism. Heal the Hate.

"Earlier this week, Abbott warned Australians the balance between freedom and security 'may have to shift', as he outlined broad new powers to crack down on suspected militant activity." BUYER BEWARE!