Joseph Bruce Skreptak is a liar 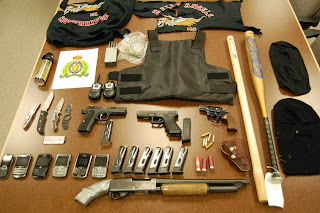 Castanet is reporting that Kelowna Hells Angel Joseph Bruce Skreptak told the court that he did not know of, or see, any of the numerous weapons found during a vehicle stop in Salmon Arm in 2010. What a bullsh*t scam that is. Another patch member getting associates to take the fall for him. He was the patch member. The colours were his. No associate would have that many weapons in his possession without the patch member's permission. Uncle Joe is a liar. If this judge buys that bullsh*t story he needs to be fired. We all know what property Uncle Joe was looking at but he sure wasn't interested in buying it.

The Kelowna Hells Angels have been a complete blight on society. Two patch members and an associate from the Throttle Lockers were convicted in the senseless and brutal murder of Daine Philips. Two little brats got in a fight with two of Daine Philips sons. One of them got Norm Cocks from the Kelowna Hells Angels involved. Norm threatened one of Daine's sons and punched him in the head. Daine was pissed and chased Norm in his car. Norm got Rob Thomas, his father and a bunch of kids to deal with Daine.

Thomas yells out three times so you wanna f*ck with the Hell Angels?! Daine raised his hands in submission while Thomas cracks him in the leg with a baseball bat. Daine is unmoved. He then takes another swing with the bat and hits Daine in the head bringing him to the ground. That's when Norm, his father and the kids jump out and beat Daine to death when he was down with hammers. It was a senseless cowardly act. The Hells Angels pulled their support and both patch members were beaten several times while in prison.

Skreptak is a pos just like Rob Thomas and Norm Cox. Thomas was a petty thief from Ontario. The Kelowna Hells Angels ran a huge stolen car, motorcycle and boat ring. Johnny Newcome was convicted of revinning the stolen vehicles for the Hells Angels. Some of which ended up in possession of the Calgary and Nanaimo Hells Angels.

The Kelowna Hells Angels were implicated in Joey Verma's murder conviction of Britney Irving. Joey was a member of the Independent soldiers and was a Hells Angels associate. I thought he was a two bit drug dealer. I was wrong. In court it was shown he was a high level drug dealers even while in prison waiting trial for Britney's murder. That means he had the endorsement of the Kelowna Hells Angels. Not only that, he was recruiting for the Kingpin crew in prison and got a tattoo that said VP as in Vice President. Someone from the Kelwona Hells Angels promised him that position. Everything hit the fan when it all went public and he was convicted. That's when the people that put him up to it turned their back on him and let him crash.

Giles is a pos who said his friends are just avenues to make him money. That says it all. Put together the murders, the stolen property and the drug trafficking and it is clear the Kelowna Hells Angels are a complete blight on society.

Skreptak already got off for running a grow by claiming it wasn't his it was the people who rented his property. Even though Hells Angels support stickers were plastered all over the grow as a warning to others. We need to deal with the Peter Leask effect in our judicial system. If this judge lets Skreptak off in this case the judge needs to be charged. they say Peter Leask isn't allowed to do criminal cases any more he just does civil. That isn't good enough. Peter Leask should be in jail. this lack of accountability is a huge problem in Canada.