Another Asteroid misses the Earth 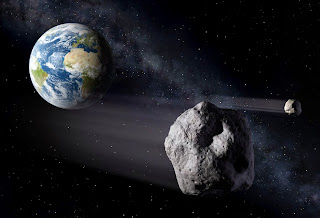 The Vancouver Province is reporting that a newly discovered asteroid with have a near miss with the earth on Sunday. Of course it will pass far away but it will be within 1/4 of the moon's orbit. To me, that's pretty close. Evidently this happens all the time. May 10th it just happened as well. That flyby marked the third-closest asteroid near miss of 2014. Turns out Sunday's near miss will be even closer. More like one tenth the moons orbit.

Evidently this happens so often they refer to them as NEA: Near-Earth Asteroids. In 2013 one passed by and made headlines when "reports said that there's a chance it could strike our planet in less than 20 years. Such a collision could unleash a force as powerful as a couple of thousand atomic bombs." This one is called NEA 2014 RC and is nicknamed Pitbull. "To understand the future, you have to understand the past." Word.

Every time we have a meteor shower the earth is bombarded with objects. Most burn up in the earth's atmosphere. We know from the craters on the moon, the moon is hit with stellar objects on a regular basis. One has to wonder if the moon ever gets hit with an object large enough could that effect it's orbit around the earth? One also has to wonder if the earth has ever been hit by a large object, what kind of impact that had on the earth's orbit or climate. Scientists claim this is what might have taken out the dinosaurs in the past. I'm wondering if a NEA passes by earth this close, does the earth's gravitational field change it's current trajectory? Prism - Armageddon.