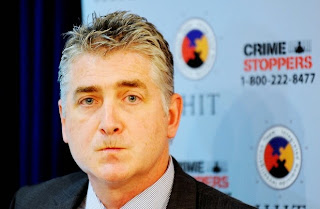 Sadly the Vancouver Province and the Vancouver Sun are both reporting on Kevin Hackett's bogus report claiming gang crime is on the decline. I wish it was. Although the peak of the Vancouver gang war was in 2009, last year the City of Surrey saw the highest number of homicides in one fiscal year ever. Most of those were drug related. The current peak in violent crime in Newton and Whalley is drug related. The horrific drug related violence in the DTES is also drug related. The sale of drugs in British Columbia is clearly gang related.

This obvious media spin is a poor attempt to rationalize Christy Clark's massive budget cuts to the Gang Task force and the elimination of the Outlaw Motorcycle Gang Unit. That was a corrupt act. Just like eliminating the RCMP task force in charge of investigating money laundering at casinos right after they issued a report about how bad it was in BC. If they want to save money maybe we should contract out our gang task force to Alberta. They seem to be on the ball. I guess if we did that Christy Clark would have to fire them for doing such a good job.

Somewhat ironic the bogus report was released the same day another shooting in Surrey and right before the RCMP found the biggest drug lab in the province's history by accident. If the fire department didn't report something suspicious they wouldn't have found it.

Don't tell me Kevin Hackett is one of Craig Callen and Bill Fordy's FOCCERS? What a huge disappointment that would be. To me he doesn't look hard core at all. He just looks dishonest.