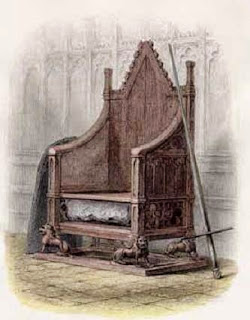 Well this is somewhat historic. Tomorrow Scotland is having a referendum on independence. The Vancouver Province ran an article about a husband and wife visiting BC that were voting opposite ways. This is one issue I am neutral on. It's up to the people living in Scotland to make that decision for themselves.

Obviously there is past history between England and Scotland. After seeing the movie Braveheart my daughter didn't like to admit we were part British. I tried to explain to her that there have been good kings and bad kings in England's history. Every country has had good and bad leaders.

I used to joke and say the only way England was able to keep Scotland in the UK was by putting a Scot on the throne. The present royal lineage goes back to Scotland: Fergus mor Mac Earca. Get this, his brother was Irish. He gave Fergus the Stone of Scone as a wedding gift. According to the Annals of Ulster. Legend claimed Jeremiah brought it to Ireland with one of the daughters of king Zedekiah when he escaped into Egypt during the Babylonian captivity. For years it sat in Westminster Abby but was finally returned to Scotland in 1996 and now rests at Edinburgh castle.

This whole referendum is somewhat interesting. Does this mean Wales will get a similar vote? What about the Falklands? Australia has talked about holding a referendum on whether or not they should remain part of the commonwealth. Personally, it's not a big deal to me although I am uncomfortable swearing an oath to the Queen. No offense.

Either way Scotland, arise and shine. May liberty prevail.

A New Zealand paper is posting live results and claims 5 of 32 council areas declared resulting in Yes 45% No 55% so far yet the Guardian is reporting as though it's all over alredy.