Another Day in Surrey - Update 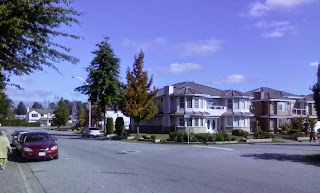 Last night at 10:41 PM Scan BC reported that #Surrey #RCMP responding to a fight involving 30+ people at 134 St & 83a Ave. Reports of several people with knives and swords. Bunch of lunatics. Ten blocks over at 12:26 AM Scan BC reported that #Surrey #RCMP are on scene with a person shot at 14500 83a Ave. Report that suspects possibly fled in a white dodge minivan.

Unrelated but near there is the Town and Country Motel and Trailer Park at 8293 King George Blvd. Turns out that place is a complete dive full of crack and drug related crime. There are lots of trailer parks and motels in the area but this one is a complete dive. Doing something about the crack there would reduce a lot of trickle down crime it creates.

Turns out the shooting on the 14500 block of 83A Avenue was a fatality. There were also two separate shootings in Chilliwack. Aaron James David Douglas, 33, the suspect wanted in the murder of two men and the attempted murder of a woman in an Aug. 7 shooting incident in Chilliwack is still at large.

Update: CBC is reporting that Aaron James David Douglas has finally been arrested.