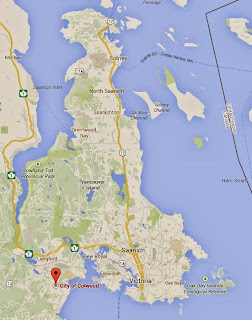 The Times Colonist is reporting that "Five men were arrested Friday at a home on Heatherly Road in Colwood (On Vancouver Island). Officers from the West Shore RCMP and the Regional Crime Unit searched the home on a warrant. Police seized body armour, heroin, cocaine, methamphetamine and GHB, which is also known as the date-rape drug. One man, a resident of the home, remains in custody. The others were released.

Earlier this month police made a similar bust in Colwood and Langford which was tied to the Red Scorpions who work for the Hells Angels.

June of last year Police arrested a 37-year-old Langford man and a 27-year-old Saanich man inj what they refered to at the time as top level drug dealers. February of this year police confirmed out source was correct and that the names of those two arrested were Ziggy Matheson and Ali Ziaee. Ali’s father was convicted of money laundering in Florida.

The Prince George Citizen is reporting that Prince George RCMP seized a stash of drugs and arrested one man at a suspected drug house Wednesday evening. A search of the home in the 400 block of Patterson Street South revealed a stash of crack cocaine, powder cocaine, methamphetamine, heroin and GHB, estimated to be worth several thousand dollars on the street. Michael Francis Willier, 35, was arrested without incident at the scene and made his first court appearance on Friday morning.