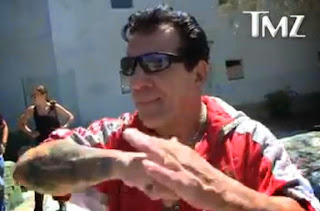 TMZ is all over this. Chuck Zito, the former president of the New York Hells Angels gone actor said he would beat the crap out of his girlfriend if he ever caught her cheating. Oh really? Adultery is a pretty serious offense but beating the crap out of a woman? Really? After the sh*t hit the fan he came out with an apology and said in actuality he would go nuclear on any guy who attacks a woman. Oh really? So which is it? Bustle.com claims his apology was insincere and misguided.

In the youtube video Chuck was asked his opinion and the Hells Angels opinion of a mma fighter named war machine who beat up his girlfriend. He said it's got nothing to do with him or the Hells Angels. If my girl was banging somebody I'd be doing the same thing. His apology on youtrube does seem rather misguided. He just reaffirms what he previously said.

According to a police report MMA star War Machine 'threatened to rape ex-girlfriend as he brutally beat her and she only escaped because he went looking for a knife to kill her'. Somewhat ironic Chuck Ziito shows his and the Hells Angels true colours when it comes to domestic violence right after Kerri Krysko writes a book about her abusive marriage to a full patch Hells Angel. 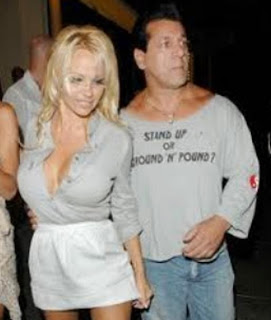 What I'd like to know is since Zito was so casual and matter af fact about how he wouldn't hesitate to beat the crap out of his girlfriend if she ever cheated on him, what other offense would be worthy of a woman being beating by him and or the Hells Angels? What was the real offense that caused the Hells Angles to stab Cynthia Garcia 27 times and dump her body in the desert? Was she really being disrespectful to them or did she just say no to the train?

Speaking about trains, who did gang rape Dianne Rock on the Pickton farm anyways? Is it true the Hells Angles did security for Piggy's Palace? That's what Stevie Cameron said in her book On the Farm after the publication ban was finally lifted. She had access to all the court documents.

What other offenses could Chuck Zito's girlfriend commit that would cause him to beat the crap out of her other than cheating? Just for the record Christy Mack, War Machine's EX girlfriend didn't cheat on him. They broke up in May and he was stalking her. He showed up at her house at 2 AM Friday and assaulted her. Is Chuck Zito's girlfriend allowed to have another relationship after they break up or would that mean he'd pull a War Machine on her? Please advise. 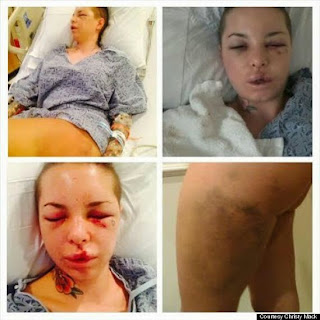 The Hells Angels brand is sure becoming synonymous with domestic abuse. In fact, in Chuck Zito's own chapter back in New York, March 1978, the chapter president, Vincent (Big Vinnie) Girolamo was charged with throwing his girlfriend, Mary Ann Campbell, from the roof of the building to her death on the pavement below. He died while he was on bail before the case went to trial.

The police claimed the New York Hells Angels were bragging about the fact that Otis Garret ordered the murder of Margo Compton and her twin seven year old daughters for testifying against him is a prostitution trial. With Zito's casual attitude about beating his own girlfriend and the fact that Vinnie threw his girlfriend off the roof of the clubhouse to the cheers of the crowd sure makes the police's claim believable.

Women the Hells Angels have murdered (We can add Patti Grondalski and her five year old daughter Dallas to that list as well.) Rage Against the Machine. The Big Red Machine.

Posted by Dennis Watson at 9:01 PM