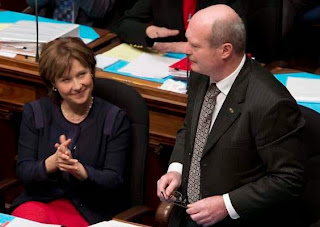 Vancouver 24 hours is reporting that "Two provincially funded sections of the RCMP are being told they are in a budget deficit and have to cut $4.2 million from their operating budgets to get things back in line. The Combined Forces Special Enforcement Unit will see $2.8 million cut from its budget and this includes the elimination of Team 6 — the unit specializing in gathering intelligence and investigating outlaw motorcycle gangs, known as OMG."

Should we expect anything less from the most corrupt government in this province's history? Let's not forget that it was the BC Liberals that did away with the RCMP department that kept track of money laundering in casinos right after they issued a report about how bad it was in BC. Maybe the RCMP should play the BC Rail card again. You know, the charges relating to money laundering that were dropped after the province renewed their contract.

How many billion tax dollars a year does CSIS lose from it's spying on Canadians budget? Christy Clark says Hells Angels are OK. It's the civilans that have to worry about government surveillance. This is the exact opposite of the advice that former OPP undercover police officer Bob Deasey showed us in his book Being Uncle Charlie which explained some of the successes Ontario had with their BEU.