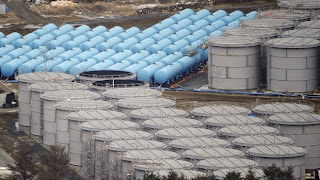 This environmental disaster with Imperial Metals has me wondering about Fukushima. News1130 reported that "a Victoria-based scientist is set to lead a new radioactive monitoring network on BC’s coast. This follows ongoing concern about our waters after a massive earthquake in Japan set off the Fukushima-Daiichi nuclear disaster in Japan three years ago. Hundreds of tons of radioactive material were pumped into the Pacific Ocean as a result of those meltdowns, prompting many here to stop eating fish and sushi."

Better late than never. My primary question is has the leak stopped yet? The cover up on the magnitude of that leak has been absurd. The meltdown in the Fukushima nuclear reactor happened in 2011. Yet years later it was still leaking radioactive water into the Pacific ocean. They figured pumping it into the ocean was safer than containing it all in one space. The needed to keep the reactor cool to prevent it from overheating and having a complete meltdown.

May 2014 they finally found the source of the leak. To me that implies it's still leaking. RT.com reported that "The source of the radioactive leak at the earthquake-stricken Fukushima Daiichi nuclear power plant was finally identified by the facility’s operator TEPCO to be in the primary containment vessel of reactor 3, authorities reported."

October 2013 Global Research reported that Water contaminated with radiation is flowing out into the Pacific Ocean from a harbor at the Fukushima No. 1 nuclear plant despite assurances from Prime Minister Shinzo Abe that it has been “completely blocked.” October 2013 Global Research also reported that Fukushima continues to leak, and leak at ever increasing rates and the latest prediction is that this contamination will continue until 2015, at the earliest.

"Before engineers can start decommissioning reactors 1, 2 and 3, which suffered meltdowns, they have to deal with the leakage. The coolant water comes out the other end mixed with radioactive waste. While it is possible to remove the radioactive fuel at this time, TEPCO wants to first plug the leak and fill up the space with more water as an additional measure against radiation."

August 2013 the National Geographic reported that "the government now says it is clear that 300 tons (71,895 gallons/272,152 liters) are pouring into the sea each day, enough to fill an Olympic-size swimming pool every eight days" and that it has likely been leaking ever since the disaster May 2011.

It's a bit confusing because the water leakage of itself doesn't mean it's being pumped into the Pasific ocean. Yet May 2014 RT.co reported that The news comes just as the facility’s operator has ensured that the groundwater leakage issue (another problem) can also be solved by simply letting the water leak into the Pacific, instead of the cumbersome process of finding ways to store it, or block it from seeping into the ocean. The operation might take place by Wednesday.

May 2014 TEPCO was in talks with local authorities about releasing the groundwater. About 560 tons is to be released in the first round, which will only take about two hours, according to an official with the Ministry of Economy, Trade and Industry. But the water buildup continues, and the short-term storage tanks that TEPCO has been relying on in the past are no longer a solution, so the operator is to set up a bypass system to prevent further buildup of the other, highly radioactive groundwater.

560 tons of radioactive water to be released in the first round. How many rounds are there? Just like with Imperial Metals tailing ponds storing the water is not a sustainable solution. Neither is dumping it into our water ways. "They" claim everything is OK because the presence of strontium-90 and cesium-134 and -137 was way below the health hazard threshold. Yeah well just who are they? The Japan Atomic Energy Agency and the Japan Chemical Analysis Center. They say it's OK so it must be. Not.

Yet last month News1130 also reported that Japanese nuclear plant clears major safety hurdle, may be first to restart in fall despite local protests. Nuclear power is bad. Very bad. It is not sustainable. The waste it produces just isn't worth it. Hydro electric is much cleaner. 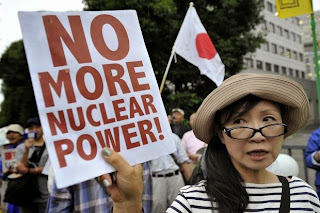