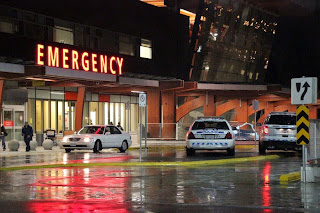 CBC is reporting that after a day that saw three separate shootings across Metro Vancouver in an eight-hour span, Surrey RCMP are dealing with violent gunplay yet again.

3:00 PM Friday police found a man in a alley shot in the 3800 block of Hastings Street in Burnaby. CBC reported that RCMP said the shooting may be related to a home invasion that occurred several blocks away an hour earlier. No arrests have been made.

Two hours later in Surrey, RCMP received a report of a man visibly bleeding at the food court at the Surrey City Centre Mall, located at 10200 King George Blvd. When they arrived, police found he had been shot twice. The 20 year old man is from Surrey and is well known to Police.

"Before the day was over, police in Delta were rushing to a house in the 8300 block of 110 Street after gunshots were reported there around 11 p.m. PT. Police said several bullets passed through an upstairs windows of a two-storey house during a drive-by shooting, but no one was injured."

OK so that's three on Friday and another one in Surrey on Saturday night. Police are investigating a possible link between an afternoon shooting in Burnaby on Friday and the arrival of a man with gunshot wounds at the Surrey City Centre mall food court roughly two hours later.

The Surrey Leader is referring to the Surrey Food court as the 11th shooting in Surrey this month. 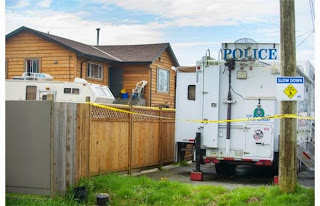 The Vancouver Province is reporting that the fatal stabbing in Burnaby was in a home once owned by the Hells Angels Nomads. The key word here is once owned. It was the clubhouse for the Regulators. That was a long time ago. Stocky's brother Romano Brienza was the former president of the Regulators. Juel Stanton was also from the Regulators. Neither of them did too well.

The Vancouver Province reported that property records show the home at 6116 - 14th Avenue in Burnaby was owned by a company called 666 Holdings Limited with high ranking NOMADS Bob Green and Gino Zumpano listed as directors. Gino used to be a prick at Brandy's until they got their ass kicked by the UN there They they wouldn't reissue Brady her liquor license as long as Gino was involved so she gave him the boot. I heard something about Tbarz I mean Shakerz and all the other HA strip bars wouldn't let girls who worked at Brandy's work at any of their clubs. I haven't heard of it's still like that.

All this obsession with 666 is pretty creepy. Bob Green's all over it. 666 Holdings. He must have listened to too much iron maiden when he was a kid. Too bad he never grew up. It was just a song. I realize 666 also stands for filthy few fellowship or F*ck ups anonymous. Otis Garret is a member of the Filthy Few Fellowship. After he was convicted of running a brothel for the Hells Angels in San Francisco called the Love Nest he was later convicted of ordering the murder of Margo Compton and her twin 7 year old daughters for testifying against him.