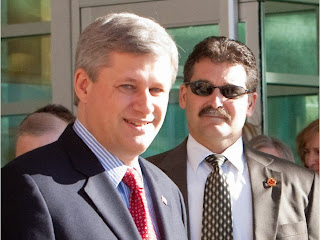 The Fifth Column is reporting that "In the latest of a string of incidents that call into question the West’s real intentions in the battle against the Islamic State, an alleged asset of Canadian Intelligence was caught red handed smuggling Islamic State sympathizers into Syria." so Stephen Harper wants to give CSIS more power to aid ISIS. Which side is he really on?

Turkish authorities are holding Mohammed Mehmet Rashid (AKA Doctor Mehmet Rashid and Mohammed al Rashid) after he was caught smuggling three teenage girls into Syria to join the Islamic State. He confessed to working for the Canadian Embassy in Amman, Jordan. On Friday, the Turkish Foreign Minister (a person holding the equivalent office of John Kerry) publicly stated: “The person arrested by us is someone working for an intelligence agency in the coalition.”

Rashid’s handler Bruno Saccomani. He confessed to working out of Canada’s embassy in Amman, Jordan. Canada’s embassy in Jordan is a very special one. It handles Jordan, Iraq, and because the office in Syria is vacant, it handles that as well. Bruno Saccomani’s prior experience is that he was a Mountie. Saccomani’s most recent position was the Prime Minister’s chief bodyguard. Bruno and Harper are in the top picture together.

"Rashid and the Canadian Embassy came into contact when he was seeking asylum. Once the Canadians became involved in his asylum case, he traveled to Canada for a brief period of time before returning and beginning his smuggling. He recorded his smuggling escapades. These videos were probably of intelligence value to the Canadian intelligence services. However, after two years it is still unclear as to why the Canadians were running the smuggling operation for the Islamic State in the first place. The intelligence value of knowing who is entering and joining the Islamic State’s ranks is not even remotely equivalent to the value of shutting the routes down."

The Guardian is also confirming that Three British girls who crossed into Syria to join Islamic State were helped by a Syrian national working as an intelligence agent for one of the countries in the US-led coalition against the jihadists, the Turkish foreign minister said on Friday.