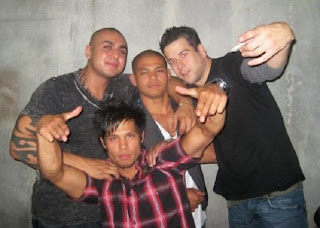 The Times Colonist is reporting that Police seized drugs, weapons and vehicles and arrested eight people with suspected gang ties after carrying out simultaneous early-morning raids in Langford, downtown Victoria and Vic West. Three homes linked to drug trafficking were targeted. One of the eight arrested Jefferson Delalcazar, was back by that afternoon. He and his girlfriend have been renting the house for the last four months. Delalcazar has not been charged.

"Delalcazar is the brother of Erickson Lopez Delalcazar, who was charged in January 2008 in connection with what was, at the time, the biggest cocaine bust in Alberta’s history, with 67 kilograms of cocaine seized. Erickson Lopez Delalcazar was a high-school friend of Lindsay Buziak, the 24-year-old real estate agent who was murdered on Feb. 2, 2008, in a vacant house that was for sale. Buziak met with her high-school friend in Calgary six weeks before she was killed, but Saanich police have said there’s no connection between him and Buziak’s murder."

Eldriegson, his brother Jefferson, Kevin Baker and one other guy beat up Jefferson’s ex girlfriend and two guys she was with in Denny’s back on Oct. 17, 2010. In the top picture Jefferson Lopez Delalcazar is in the middle, his brother Eldriegson is in the front and on the left is Ali Ziaee.

In June of 2003 Ali Ziaee and Ziggy Matheson were arrested and were described at the time as top level drug dealers in Victoria. Ali Ziaee's father was convicted of money laundering and bank fraud in Florida. Ziggy is friends with Lindsey Buziak's boyfriend she was trying to leave right before she was murdered. In the bottom picture Ali is on the left and Ziggy is in the middle. 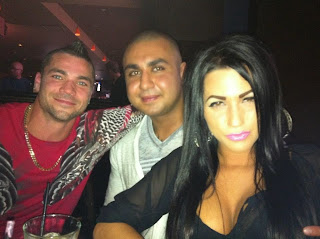