Departures: Libya and Beyond 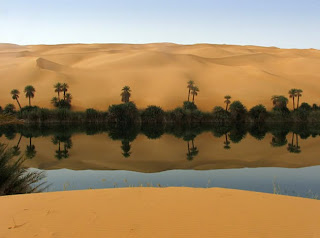 Taking a brief intermission from the troll drama I'm still really enjoying this TV series Departures on Netflicks. It's rather profound. Two Canadians take a year off to travel the world. Right from the get go Justin explains that this isn't a holiday. A holiday is me getting stoned every day on the beach. This is an adventure. Indeed it is. They avoid the typical tourist destinations and get the inside look by meeting and traveling with locals. However, it was more than that. Scott talked about how much Justin had grown early on from their experiences as it was the first time he had been out of North America. Justin was living with his girlfriend in Hawaii after spending two years in Las Vegas which was as he described pretty much him getting drunk every day.

Season one concluded their year of traveling and resulted in their return to Canada. Justin's girlfriend hadn't waited for him so what he had before he left was gone. No doubt after a year on the road returning home was a bit of a culture shock. It sure was for me after spending 4 years on the road. I'm from Vancouver and after spending two years in Ireland I couldn't get over the greed and materialism here. I just could relate to it any more. I really wanted to leave when I got engaged so my kids would be born in Ireland. After calming down and thinking about it, I thought I'd be able to provide my kids a better standard of living if I stayed. There is good and bad everywhere you go.

It's just the materialism I found really irritating. They call Vancouver lotus land. Rich people riding around in ridiculously expensive luxury vehicles. The yuppie drug dealers make it ten times worse. They don't have a clue about what life in the hood is really like.

So anyways, after a year of traveling Justin hadn't had enough and went on his own to Europe. His friends Scott and Andre end up meeting him in Spain for a festival and then toured Morocco. Then they decide to start another season of adventures and go to Libya. What an amazing place. Lots of well preserved Roman ruins and of course the magnificent Sahara desert. They rent sand boards which is like snowboards except for the sand and decide to try wake boarding in the sand behind their land rover. Great idea. Only they forgot to rent helmets. Justin catches an edge, lands on his head and gets knocked unconscious. It was hilarious. Yet sand boarding down a slope beside an amazing oasis was astounding.

The thing is right now television sucks. Completely. It all went down the toilet with all those stupid episodes of Survivor. Trying to be sneaky and vote others off the island while you promote your own political agenda. That is so typical North America it's embarrassing. What ever happened to chivalry or sacrificing for someone else? You don't see any of that there. Instead it's all about me and has spiraled downward in an ongoing ridiculous tirade of reality television that is ultimately a complete waste of time. Don't even get me started on Sons of Anarchy. I love riding motorcycles. It's all the crack head drama that I can't stand.

The thing is after the first year Justin had changed. He matured. In a previous post I recommended people travel and get out of the fish bowl. That's not possible for everyone. The cost of housing is off the charts right now. Parents have to make sacrifices for their kids. Braces for your kids are more important than travel for you right now. Everything has it's time and place. I recommend young people travel so they can see what it's like in other parts of the world. I'm not talking about the yuppie drug dealers that go to the beach in Mexico every year. They aren't learning anything from that and as a result they simply aren't growing up.

Yet if you simply watch the series you can get a glimpse of what I'm talking about. My daughter took a couple trips to Colombia. She loves Spanish and had an awesome time. Recently in our financial struggles she said to me in Colombia the people are dirt poor but they are really happy. Imagine that. No one likes to starve or live in poverty. It's just this bizarre sense of greed that we are constantly bombarded with on television that is so empty and unfulfilling.

Blaze is an idiot. Everyone can see that. A 41 year old man selling drugs to high school kids riding around on a bmx is the epitome of loser. Every word that comes out of his mouth proves it further. Another toll, Naniamo girl, sees Blaze's trash and takes courage. He says What's the obsession with crack cocaine? These aren't the /80's. You must not get out much. You must never have been to the DTES or outside the Front Room in Surrey where the crack epidemic is alive and well. That's why they hand out freaking crack pipes at the taxpayers expense.

Many years ago on my second trip to New York City, we had just broken up a fight between two crack heads with kitchen knives on the deuce (East 42nd Street) which was like the Main and Hastings of crack. One guy comes up to me, calls me Dirty Harry and says I've been watching too much television. I scoff and reply yo bro I don't have a television. This isn't a zoo. This is the city and what these clowns are doing isn't acceptable. There are families and regular people here that just want to do business without seeing that kind of crap. Everyone else agreed. They said we were doing a good thing. That was the New York model.

When we were busting up crack shacks in South Seattle, one lady says to me those crack dealers wouldn't leave from outside my doorway until I poured bleach on their heads from the window. They left in a hurry after that. I smiled and laughed. Now that is a New Yorker. I love New York.