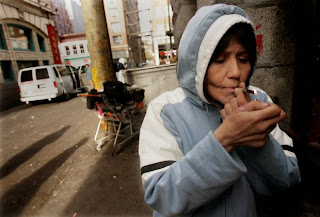 The Vancouver Province is confirming a Scan BC report that Vancouver police are investigating a double stabbing at the West Hotel at Carrall and East Pender Street in the downtown eastside that has left two men dead. It is obviously not gang related but it clearly is drug related. That is the epicenter of crack cocaine just like Cobalt and the American Hotel where Anthony Terezakis filmed himself beating the life out of drug addicts who owed him money for drugs. I guess giving them a free crack pipe didn't save them from getting stabbed. The West Hotel was another drug den where the addicts were too afraid to even mention the term "the boys" thinking the walls have ears.

That side of the street has undergone some gentrification yet it is half a block from Pigeon corner and blood alley where all the crack is sold. A little further down Carall St is the Irish Heather and the Blarney Stone which is nicer and starts to turn into Gastown.

A couple years ago I was walking to my car from the Irish Heather and a guy asks me if I wanted to buy some boulders. No thanks I said and kept walking then I stopped and said what are you selling? Boulders he said - Rock. I laughed and said yo man I've never heard rock called boulders before. Whatever. It's still on the street.