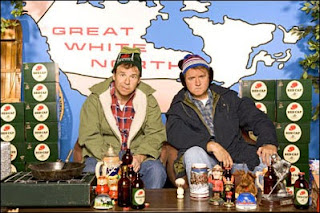 Well the Daily Dose of Nuttall Nonsense has finally reached it's climax. Our esteemed media has become an episode of the Wizard of Oz with dancing scarecrows singing if I only had a brain. The Vancouver Province reported that they played the jihad video made by the RCMP staring two Surrey drug addicts in the pressure cooker entrapment case. This video certainly is an eye opener. If the RCMP can get two drug addicts to fake that video, how many other videos have been faked?

The suspects didn't make the video, the RCMP did. The suspects appeared in the video the RCMP made. They were in a hotel room the RCMP rented for them. The RCMP gave them the black flag with the Arabic writing on it because they don't know Arabic.

In the video Amanda Korody states the enemy is evil, “Fight them, light or heavy, with whatever you can,” says Korody. “If you have a stone, throw it, if you have a bomb, drop it. If all you can do is give them the finger, then give it to them.”

Then John Nuttall says wait a sec I think we should re do that part. Blowing up people is fine but giving people the finger isn't very polite. A real Muslim wouldn't say or do that. That's a Surrey Jack saying slipping through. If we want people to think this is a real video made by Muslims we should edit that part out. Good point Surrey Jack. That last dose of heroin must be wearing off. We didn't think about that. We do want to make this sound like a real jihad video even though anyone with a brain can tell it isn't.

The police drove them around with a shipping list and paid for the pressure cookers the two suspects were not intellectually capable of turning into a bomb. I don't care how long you put a surrey drug addict in a hotel room you paid for with a pressure cooker and a toy clock. He is not going to be able to make a bomb that works out of them. I couldn't do it. If you filled the pressure cooker with gunpowder as the original recipe claimed, how are you going to secure the lid so it explodes? With duck tape? That's not going to be a very big explosion. How are you going to ignite it? With a fuse you light with a match. That'll work. He is not going to know how to make a timer set off the black powder electronically. He's certainly not going to know how to ignite the C-4 the RCMP agent gave him or how to use the accelerant to make the C - 4 explode. I couldn't do that and neither could a pair of surrey drug addicts.

The article states cop told the B.C. Supreme Court jury that the plan for June 30 was to pick up Nuttall and Korody at the Delta motel and have them transported to Vancouver Island. Why because the couple didn't have a car and the police had to drive them around the whole way, pay for everything because the drug addicts didn't have enough money to buy food for themselves and they had to keep reminding the drug addict to not get distracted all the time and stay on task making a fake bomb he was not able to make.

Now we hear that Amanda wanted to back out. Big surprise. The court already heard wiretaps from a private conversation between the two drug addicts where John Tells Amanda don't screw this up because the police agent would turn from Mr nice guy into a monster and would kill them.

So when the RCMP agent told the drug addicts to come up with a plan they suggested two. One was to plant a bomb at a military instillation and the other was to plant a bomb at a public function like a firework display. The RCMP agent told them to do the public bombing. He paid for the fake bomb parts and drove them around to pick the parts up. Under questioning from prosecutor Peter Eccles, the cop told the B.C. Supreme Court jury that the plan for June 30 was to pick up Nuttall and Korody at the Delta motel and have them transported to Vancouver Island. Simply because the Surrey drug addicts didn't even have money for the ferry trip.

This case is the epitome of entrapment. We are spending too much tax dollars trying to convince drug addicts into committing acts of terrorism all to fulfill Harper's dream of destroying civil liberty and the Canadian Charter of Rights.