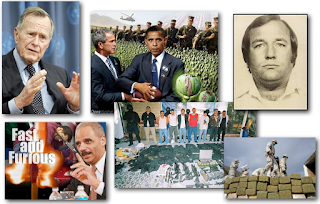 The Independent is reporting that US Drug Enforcement Administration agents working abroad took part in “sex parties” with prostitutes that were funded by the drug cartels they were meant to be battling, according to a Justice Department report.

The report found that the alleged activity happened over a number of years and that, in addition to the so-called sex parties, the agents were also provided with money, gifts and weapons from cartel members. The report also included investigation into the US Marshals, the FBI and the Alcohol, Tobacco and Firearms Bureau. Previously were were aware the US Secret Service was involved.

We know the AFT were deeply involved with Operation Fast and Furious, a CIA Operation that sold the Mexican cartel guns and brought back tons of cocaine as payment. This is what the Agency learned from Judge Bonner. Judge Bonner stated that when he was in charge of the DEA the CIA brought a ton of cocaine into Florida. The CIA passionately denied it until he went on 60 Minutes and documented everything. Then they finally admitted it and said it was a mistake and it was the only time. Both statement were untrue. It was not a mistake. They never made any attempt to track the cocaine once it arrived in the US to arrest anyone just like in Operation Fast and Furious and it most certainly wasn't the first or last time the CIA was deeply involved with drug trafficking.

In Mena Arkansas the CIA was deeply involved with cocaine trafficking. In Vietnam the CIA was deeply involved with heroin. Just like they are now in Afghanistan with the help of the US military protecting the opium crops. The Gary Webb story showed the CIA was responsible for the US crack epidemic in the /80's. Operation Fast and Furious showed that the cocaine trafficking of Iran contra never stopped. What the CIA learned from the judge Bonner story was the only way to shut up the DEA was to infiltrate it. In Canada the RCMP had John Nuttall selling heroin.

That's the same thing CSIS learned from the Air India bombing. The only way to shut the RCMP up was by infiltrating it. Operation Fast and Furious is Obama's Watergate. CSIS getting caught supporting ISIS is Stephen Harper's Watergate. His own personal bodyguard was involved. Every time Stephen Harper says ISIS is bad we need to fight them we need to ask him why his bodyguard and CSIS were supporting them. Every time he mentions we need to give CSIS more power we need to ask him why CSIS hasn't been charged with murder for supplying the bombs for the Air India attack. The Hells Angels are a criminal organization but so are CSIS and the CIA.