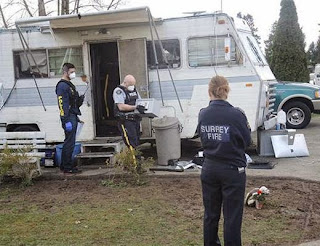 The Vancouver Province is reporting that 12 people were arrested for possession for the purpose of trafficking, possession of stolen property and other drug-related crimes after police executed four search warrants at a trailer park near 84th Avenue and 135A Street. Someone must have taken over for Bill Fordy when he was away on holidays sorting his sex texts from his work texts.

It doesn't say what drugs were seized but the search warrants were looking for crystal meth, heroin, cocaine and pot. This is good news. I hope it's not just a publicity stunt while Linda Hepner is away on another tax paid junket. Residents have been complaining about drug trafficking in many other trailer parks for years and nothing has been done about it. That would fall under criminal negligence. When Dianne Watts was mayor a high school student wrote in and Godzilla was quick to seize the publicity but did nothing as always. She said gee that's too bad. The land lords shouldn't rent out to drug dealers and sex trade workers. I kid you not.

That was the brain surgeon that put us in record debt and broke the record for most homicides in one year for Surrey. This trailer park arrest is a good start but it's only a start. Let's press charges and keep them coming so it doesn't look like another publicity stunt.