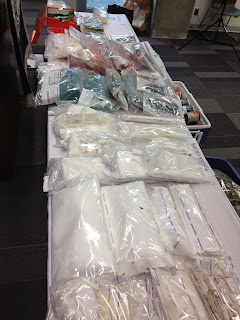 News 1130 is reporting that police seized several kilos of pot, cocaine, meth, crack, MDMA and 13 kilos of Fentanyl in Chilliwack. Usually Fentanyl is measured in number of pills not kilos so this must have been raw product before it made it to the pill press. It states the drug network was based in Chilliwack but was operating between Williams Lake and Fort St. John. Hmmmm. big city gangs expanding into new small town markets. I wonder's who's MO that is.

The CFSEU is reporting that in one apartment they seized 10 kilos of cocaine, a cocaine press and 28 kg of Phenacetin and caffeine used as a cutting agent.

During the execution of the five search warrants on February 26 2015 police seized 1.6 kilos of crystal meth, 2.5 kilos of cocaine, 2.1 kg of Fentanyl powder and clarified that the 12.83 kg of Fentanyl pills was approximately 43,000 pills. I guess it's too many to count and easier to weigh. They also seized 56 kilos of Phenacetin and 54 ‘tubs’ of MSM or Methylsulfonylmethane which are both used as cutting agents for cocaine to water it down and make more money.