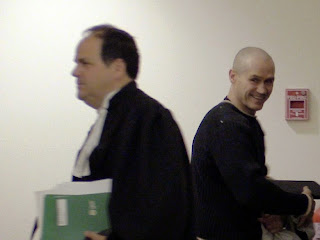 As several readers pointed out the Montreal Gazzette reported that "Eighteen men with ties to the Hells Angels, including two who were among the gang’s first full-patch members in Canada, pleaded guilty to taking part in a general conspiracy to commit murder on Tuesday, putting an end to yet another possible trial before a jury in Operation SharQc. If the four guilty pleas go ahead as planned on Tuesday, it will bring the number of men who have admitted to taking part in the murder conspiracy to 86, or more than two-thirds of those originally charged with the conspiracy in 2009.

That is certainly more than a few bad apples. That is a pattern, a method of operation shall we say. The Montreal Gazette pointed out that "two of the biker gang’s founding members in Canada, Michel (Sky) Langlois, 68, and Normand (Billy) Labelle, 59, were among the group who pleaded guilty and the land in Sorel where the gang built their first bunker, after chartering the Montreal chapter in 1977, was officially confiscated by the government."

"Langlois and Labelle were there from the beginning and, on Tuesday, they admitted they had a role in the gang’s most violent period in Quebec, between 1994 and 2002, when the Hells Angels sought to kill the members of rival gangs who opposed their monopolistic attitude toward the sale of drugs like cocaine, hashish and marijuana. The conflict resulted in the deaths of more than 160 people, including several innocent victims."

They were paying a portion of their drug profits into a fund to murder rival drug dealers. That is what the Quebec biker war was really about. Murdering rival drug dealers to obtain a monopoly on the drug trade. That is a historical fact that is consistent with the Hells Angels original mandate.

That is what's happening here in BC as well. All the lies and denial cannot change that.

"Six of the 18 men were sentenced to serve one day in a detention centre on top of the time they have already served behind bars since 2009, the equivalent of 11 years and seven months."

Posted by Dennis Watson at 7:27 AM