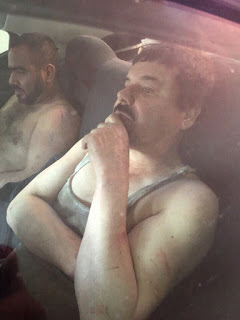 The New York Times is reporting that "Nearly six months after his escape from a maximum-security prison in Mexico, the drug kingpin Joaquín Guzmán Loera, also known as El Chapo, has been arrested by the Mexican authorities, President Enrique Peña Nieto announced Friday."

Personally I think the whole thing is a bullsh*t scam. The ATF were selling the sinola cartel guns and bringing back tons of cocaine as payment in Operation Fast and Furious. When are they going to be arrested? Obama used executive privileged to prevent those involved from being arrested just like Nixon tried to do in Watergate. Obama should be arrested for aiding and abetting that crime.