Police seize $1.4 million from the Alkhalils 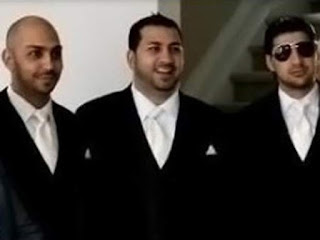 The National Post is reporting that "Police pressure on a self-made crime group built by five gangster brothers continued as authorities seized real estate housing a restaurant in Ontario and a nightclub in Quebec from the Alkhalil organization, claiming the buildings are the proceeds of crime." This is not a self made crime group. These are Hells Angels associates

Rabih Alkhalil was charged with cocaine trafficking along with Larry Amero in Montreal. Rabih Alkhalil is from Surrey and was in court for the murder of Johnnie Raposo in Toronto. Rabih Alkhalil is a suspect in the Sheraton Wall Centre shooting in Vancouver where Sandip Duhre was shot dead January 2013. They shot a Hells Angels rival. Police sources say that Alkhalil was the mastermind behind the Duhre murder, while Wiwchar was the suspected hitman.

Larry Amero attended Nabil Alkhalil's wedding in Ottawa with Jonathon Bacon before they were shot in Kelowna. The Alkhalils have been Hells Angels associates since day one. Another one of the brothers, Mahmoud Alkhalil, was shot dead in the Loft Six shooting back in August 2003. The Loft Six shooting was an attack on Hells Angels associates in Vancouver.