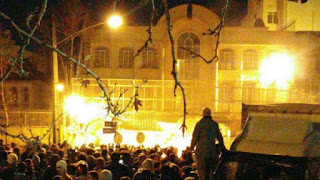 France 24 is reporting that "Angry crowds protesting at Saudi Arabia's execution of a top Shiite cleric hurled petrol bombs and stormed the kingdom's embassy in Tehran Saturday before being cleared out by police, ISNA news agency reported."

"The incident came hours after the announcement of the death of 56-year-old cleric Nimr al-Nimr, who had been a key figure in anti-government protests in the kingdom's oil-rich east. The execution prompted strong condemnation from Shiite-majority Iran and Iraq. Nimr, who spent more than a decade studying theology in Iran, was among a group of 47 Shiites and Sunnis executed Saturday on charges of terrorism."