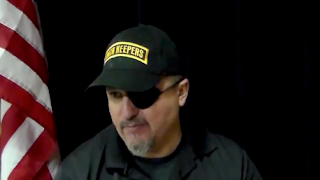 CNN is reporting that Armed anti-government protesters have taken over a building in a federal wildlife refuge in Oregon, accusing officials of unfairly punishing ranchers who refused to sell their land. One of them is Ammon Bundy, the 40-year-old son of Nevada rancher Cliven Bundy, who is well-known for anti-government action. He spoke by phone to CNN on Sunday. Asked several times what he and those with him want, he answered in vague terms, saying that they want the federal government to restore the "people's constitutional rights."

I have in the past spoken about the Oath Keepers with great respect and admiration. That group was founded in 2004 by Stewart Rhodes, a former U.S. Army paratrooper and a Yale Law School graduate who once worked for Congressman Ron Paul to protect the U.S. Constitution against enemies foreign and domestic. They call themselves oath keepers because they believe in keeping the oath US civil servants make to protect the Constitution which most have broken.

Some of their supporters have championed a specific cause related on the right of ranchers to have their cattle graze on public land. Now I am somewhat familiar with civil liberty and the sacred principles in the US Constitution and Bill of Rights which is very similar to the Canadian Charter of Rights. Free speech, lawful assembly, the freedom from unnecessary searches and seizures, the need to be charged with a criminal offense before being arrested. The right to a lawyer and a speedy fair trial. These are all sacred rights in any democratic society. Canadians visiting the United States are denied these fundamental rights because they are not American citizens. That is an abomination. I'm left scratching my head over the obsession with the right of farmers to have their cattle graze on federal land.

My message for the protesters in Oregon is what the f*ck are you doing? We have serious breaches of civil liberty and the Constitution everywhere and you have completely lost that focus by being completely distracted by cattle grazing on public land. Who cares? Denying people the right to a lawyer and a fair trial while they are tortured in black prison sites is a colossal concern. Comparing that with cattle grazing on federal land is an absurd tangent.

Stewart Rhodes has posted his proposed exit strategy for the protesters in Oregon and it sounds like it was written by George Washington himself. He states that although he personally has immense respect for Ammon Bundy he opposes what Ammon chose to do by occupying the wildlife preserve in Oregon, specifically because it is not being done with the consent of the locals or at their request.

Stewart Rhodes states "I propose that you return to and adhere to your own stated principles of respecting the right of the people of Harney County to self-determination, self-government, and their right to stand up, on their own two feet, with our support and protection. Therefore, you need to submit yourself to the authority of the Committee of Safety and the people of Harney County at large, and let them know, in no uncertain terms, that they are now in charge, and you will comply with whatever they decide must be done, whether you agree with it or not. So throw your sword at the people’s feet, and pledge and swear that you will abide by their decision, whatever it is, and defend them in doing whatever they decide is best, so long as it is ethical, moral, and constitutional. But it must be their decision, not yours. That is the honorable, ethical, moral, and constitutional way to go. That is an honorable exit plan." Indeed it is. Peace.