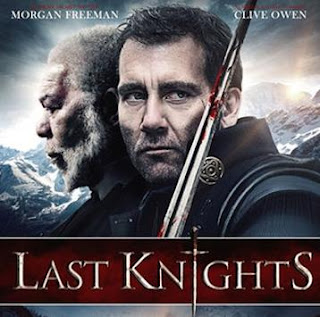 I saw the movie Last Knights on Netflx the other night. It was well done. It's very similar to the movie 47 Ronin which was awesome but I think many westerners would have a hard time understanding the Bushido culture in that movie. This one might be easier for them to understand.

Although this movie was about knights and noblemen, it had an eastern influence because the head of the state was an emperor not a king like in western europe. The setting in this movie was more of an eastern Europe setting after the manner of Ghangus Khan or Alexander the great. The movie A Knight's Tale was more of a traditional British knight movie.

The similar theme was that honour is something no man can give you and no man can take away. The Scottish highlander Rob Roy explained it well to his children. Hs kids asked him if their clan would ever return to being kings. He responded by saying all men with honour are kings but not all kings have honour. It is about a soldiers code.

I almost had to turn the movie off half way through. It was getting hard to watch and one would think there is no way anything positive can come from this. Then the plot changes and the real plan is revealed. The hero in this movie was a commander for a noble leader. The Sergeant at arms so to speak. The opposing Sergeant at arms respected him and was also honourable. Sadly the other commander's leader was not very noble at all. He was a weasel tyrant that beat women. It's too bad the opposing commander didn't join the hero's quest like the storm trooper who deserted in the new Star Wars movie. Some causes are just. Some are not.