More drugs in rural BC 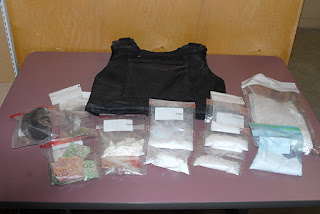 Penticton Western News is reporting that "A Midway man is in police custody after fleeing on foot from a traffic stop Wednesday afternoon. Shortly after 2 p.m. on Jan. 6 a Kelowna RCMP officer conducted a traffic stop with a black Mercedes SUV in the 2300 block of Hunter Road. The driver of the Mercedes was found to be in breach of his court-ordered, 24-hour curfew related to a conditional sentence order."

The suspect grabbed a duffle bag and fled on foot. After he was apprehended the police found a small quantity of cocaine, heroin and crystal meth packaged for resale, a .22 hand gun and break in tools. Midway is in southern BC near the US border outside Osoyoos.