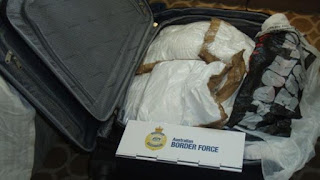 This is old news now but it will be impacting the lives of those involved for many years to come. The headline has changed slightly. First it was three Canadians now it's 2 Canadian women. I guess they're more photogenic than the 63 year old man. The news report says 95 kilos of cocaine was found in all of their luggage and it is suspected that it is part of an organized crime ring. Not too many young girls are full patch members of many Canadian crime rings. It appears that the young girls are taking the fall for the dirty old man. Initial reports said all three were charged. Smuggling that much cocaine on a cruise ship isn't the smartest thing to do but I'm wondering how authorities knew what was in their luggage and were waiting for them. Was Homeland security ratting out a rival?

Looks like they were on a wonderful holiday. Who wouldn't want that? Now they could be spending life in prison. What a tragic end to the lives of two very young women who had their whole lives ahead of them. Locking them away for 300 years will do nothing to stop the people they were working for. This tragic case reminds me of the Stanleys.

Gary Yuzik, Robert Stanley and his wife Cindy Stanley were caught with 200 kilos of cocaine aboard their sailboat en route for Australia. Only they didn't wait for them to arrive in Australia, they intercepted the vessel when is was passing by New Caledonia. They hadn't even docked there. Why they were held in a New Caledonia prison in horrific conditions without a fair trial was shocking. That is just plain wrong. They should be tried in Australia and be imprisoned in Australia with the possibility of a prison transfer back to Canada. Torturing prisoners is something Canadians used to oppose. This kind of thing diminishes all of us.

I'm not sure why Gary got transferred to France and not the Stanleys. Hopefully all three did.