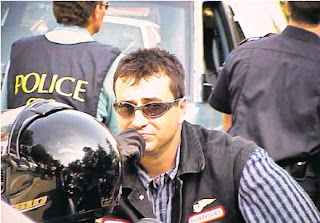 CJAD News is reporting that "Police in Sherbrooke have unearthed around $45 million on a former Hells Angels compound. The money was buried in plastic buckets in various spots of land, and was only found after police received the tip from former gang member Sylvain Boulanger. According to the Journal de Montreal, Boulanger was paid nearly $3 million for his information."